The Cascade Blues Association held the finals for the 15th annual Journey To Memphis competition on July 4th at the Waterfront Blues Festival. Four finalists selected by our judges scoring at the first round held at The Lehrer in early June, faced off against one another in the hot summer afternoon before three new judges. This year’s overall competition was without doubt one of the strongest fields ever, top to bottom. Covering a wide diversity of blues styles, twelve acts started out and four remained at the Festival. 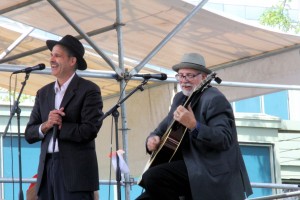 One of the three was a solo/duo act, David Pinsky & Phil Newton. They had already earned the right to travel to Memphis to represent the CBA at The Blues Foundation’s International Blues Challenge in January. We still had to decide on a band amongst the three remaining acts. Why were David and Phil involved then? They were competing for the overall prize money to help them get to Memphis. If they scored higher than the bands they would be awarded the grand prize.

The other three acts included two bands that made it to Memphis in 2014 for the IBC, Rae Gordon who made the semi-finals back East representing the Rainy Day Blues Society of Eugene, and Ben Rice & The iLLamatics who went for the CBA and made it all the way to the finals. The newcomers were Salem’s Still Water Vibes, a fiery new band with sensational vocals from Nick Wixom. All three acts, along with David and Phil, turned in knock-out performances, all worthy of taking home the prize.

But it was all up to the scoring of the judges. And we had three of the best judges you could ask for, all on the same level as those judges used in Memphis at the IBC finals themselves. Music writer and editor Stacy Jeffress from Topeka, Kansas; Delta Groove recording artist from Australia Kara Grainger; and Delta Groove artist and past IBC second place winner Sugaray Rayford. Each scored the competitors on five categories: blues content, originality, vocals, instrumentation and overall stage presence.

A tough call to make, but in the end it was the Rae Gordon Band coming out on top. Aside from the prize money and the right to represent the CBA in Memphis this coming January, the band will also open the Muddy Awards show this coming November and will have a guaranteed paid set at next year’s Waterfront Blues Festival.