It’s April, spring has officially arrived Portland, and the light is lasting longer in the evenings. While the summer and festivals cannot be too far down the road, there is always something going on in Portland to satisfy your blues cravings, and of course the best place to quench that thirst is at the Cascade Blues Association’s general membership meeting the first Wednesday of every month. We will always line you up with the fun music and acts you know or should know. 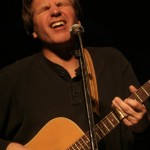 For the April meeting we are going to be bringing back singer/songwriter Robert Richter, an energetic performer creating music that blends different genres from folk to blues to rock — all played with passion and energy. His descriptive songwriting and storytelling covers topics dealing with everyday life.

A self-taught guitarist from the age of 12, Robert Richter has performed at numerous events and festivals, including The Rose Festival and NW Folklife. He recently released a new album of all original material, Thick and Thin, and he hosts his own radio show, Loca; Roots broadcast on KMUZ-FM 100.7 in Salem and streaming live online at KMUZ.org. The show features original music from NW Indie artists. It airs Sundays from 7 pm to 9 pm.

Joining Robert Richter will be part of his band with Olivia Duffy on vocals, mandolin, and violin, Willie Gilmore on bass, and Casey McBride on percussion. Expect the group to play songs from the new CD, as well as some classic blues from Jimmy Reed and Slim Harpo. Robert also expects to do at least one song solo on slide. 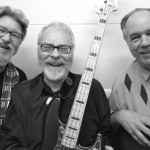 jealous. GreyDogz is guitarist John Crain, keyboardist Grant Johnson, and bassist Bill Hansen, and all have played with some of the best performers around the country. These are master musicians who seamlessly play blues and zydeco, standards and New Orleans jazz-inflected classics as well as original compositions, spanning over thirty years of experience living, loving, and interpreting this music in the tradition of the greats. GreyDogz has been working regular gigs at The White Eagle and Duff’s Garage.

Guitarist John Crain started Oregon’s first Reggae Radio Program and formed the band Native Pulse in 1980. The band held the closing spot at the Oregon Country Fair for three years running.  In Portland, Crain has played with J.C. Rico, Kita Montgomery and several gigs with Paulette Davis, as well as forming the band Mumbo Gumbo with Ural Thomas and touring cross-country with Etoufee.

Grant Johnson is a jazz and blues pianist with vast experience as a performer, session player, composer, arranger, and teacher. He recently finished recording Billy Wolff’s Threat Matrix with jazz legends Russell Ferrante, Will Kennedy, Bob Mintzer, and Jimmy Haslip of Yellowjackets fame, and was a founding member of the Bay Area jazz combo Segue. He has also performed and recorded with Grammy Award-winning blues and rock greats like Charlie Musselwhite, Jackson Browne, Dobie Gray, and Gene Vincent. Johnson was a founding member of The Psychedelic Rangers with Billy Wolff and John Densmore and Robby Krieger of The Doors.

Bill Hansen, originally from Portland, Maine, is a seasoned pro who has worked with a number of recognized artists like Dick Curless, Lenny Breau, Blood Sweat & Tears saxophonist Fred Lipsius, and Boston’s Brad Delp. Bill has an excellent sense of rhythm and groove, earning him the nickname from the band “The Thunder Pump.”

Come on out and join us for what is sure to be another fun night with CBA friends and great music. Plus you’ll have the chance to win prizes just by attending with our free ticket drawing. Don’t miss out. If you’re not a member, now is a great time to consider joining.

Oh, one more thing — for all acts wanting to participate in the Journey To Memphis, this meeting is the deadline to have your applications turned in. Don’t forget to do so!