Summer is flying by and you certainly cannot complain about the availability of great music happening around the region. Festivals, concerts in the parks, touring acts — it’s all more than one person can keep up with. We are certainly blessed to have such a wide selection, and as you know, the best way to kick off each month is with the Cascade Blues Association’s membership meeting. This month we’re handing our members a double-eyed whammy with our annual picnic happening the first Sunday (check the article in BluesNotes) and then our monthly membership meeting the following Wednesday.

As for our August meeting — this will be one not to miss. Both acts are stellar, long-time artists who hardly need any introduction.

Opening the night will be the fierce duo of harmonica ace 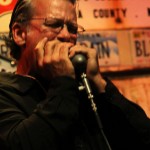 Mitch Kashmar and guitar master Alan Hager. Kashmar is known as one of the finest harpists on the West Coast who also delivers soulful vocals. Kashmar records for the Delta Groove label and has been a prominent musician for decades since playing with The Pontiax before going solo. Over those years he has performed onstage alongside talent such as John Lee Hooker, Stevie Ray Vaughan, Lowell Fulson, Pee Wee Crayton, and many others. The late William Clarke stated: “Mitch Kashmar is my absolute favorite blues harp player of his generation, and one of my favorites period! He’s also a first-class vocalist – his singing really knocks me out.”

Joining Kashmar is the Cascade Blues Association Muddy Award winning guitarist Alan Hager. Hager is a terrific solo musician, and when he plays alongside others artists he is the perfect complimentary guitarist, as those who have played with him, such as Bill Rhoades, Terry Robb, and Dave Fleschner will attest. Hager is well-versed in music history, not just the blues, and has studied at Berklee College of Music and the New England Conservatory of Music and performed as a member of the Boston Symphony and Boston Opera Company as well as several chamber music ensembles. He is a guitarist’s guitarist, as Terry Robb noted: “Alan Hager’s musicianship is the standard by which I judge all others, particularly myself.” High praise indeed!

For the second set of the night, we will be featuring The Reverb Brothers, a strong collection of several of Portland’s best musicians who have been working together for a number 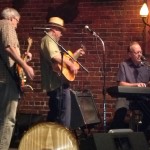 And don’t forget the free ticket drawing — all in attendance receives a ticket for a chance to win prizes between the sets. There’s always a good time gathering with friends for great blues music, so don’t miss out on the monthly meeting. See you there!