The Melody Ballroom, 615 SE Alder St., Portland
Members always Free – Non-members $3.00
Opening Acoustic Set –  Vicki Stevens & Sonny Hess
Second Electric Set – August In Blue
First of all, please note the date for the February meeting. We will be holding this month’s meeting on Thursday, due to a 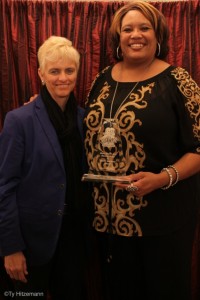 large group using the room on Wednesday. The good people at The Melody were asked to book a high-paying, catered event on Wednesday and asked if we could change the date for our meeting. They have been so good to us over the many years we have held our monthly events here, completely donated by The Melody, how could we not agree. It is the only time in my memory that they have ever requested this and it has been a very good partnership over that time. But even though the date may be one day later than normal, you know we’re going to have a great event just the same.
Sonny Hess and Vicki Stevens – photo by Ty HitzemannOpening the night will be 2013 Muddy Award recipients for Best New Act, Vicki Stevens and Sonny Hess. Like at the picnic this will be the acoustic duo with Sonny on guitar and Vicki on harmonica, with both providing vocals. Sonny is a Portland area legend having performed with numerous acts, leading her own band, holding the annual Northwest Women in Rhythm & Blues events, a multiple Muddy Award recipient and has been nominated for Lifetime Achievement recognition, too. With her guitar prowess, you’re surely going to understand why she is called Sonny “Smokin’ Hess” for a reason. Vicki Stevens moved to the Northwest a few years back, settling in Eugene and then Seattle before making the move to Portland and partnering up with Sonny. She is an award winning vocalist and represented the Rainy Day Blues Society in Memphis at the International Blues Challenge a couple years back. Vicki and Sonny are planning on entering the Cascade Blues Association Journey to Memphis this year, where you know they’re going to give the judges an impressive taste of their talents. We get a nice preview of what they’ll offer at the meeting. Always an entertaining and exciting act, you do not want to miss Vicki and Sonny. 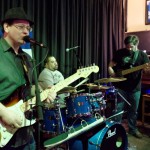 For the second set, we will also be bringing back a group that performed at last summer’s picnic, but with an altered line-up from what we saw then. August In Blue has August In Blue – press photobeen a long-time dream of guitarists Richard Staats and Josh Makosky, who have making music together since they were in the 8th grade. In the summer of 2012 the two joined forces to blend the upbeat precision of rock and funk with the soul and emotion of the blues. Thus the birth of August In Blue. A band formulated and assembled on the month of the Blue Moon. Both have performed with bands on their own, Richard with Stupefyin’ Jones and Josh with Angel Bouchet and most recently with The Space Monkeys. With the fiery, funky thump that you come to expect from Calen Uhlig, plus the soul and groove of the amazing Brian Foxwoth, the combination becomes explosive. Having this rhythm section alongside this pair of hot guitar players just means that the members are certainly in for a big treat at the meeting.
Remember to pick up your free drawing ticket as you enter the venue for a chance to win great prizes and consider purchasing one or more $1.00 tickets for the multiple CD package, where the money will go to help the CBA maintain its business expenses and assist in upcoming events. And bring a friend or two and convince them they should join one of the finest blues societies in the country. You may not need to do too much convincing, as they’ll see for themselves just how much fun we have.
See you all there!!
January 30, 2014/by Wendy Schumer
https://cascadebluesassociation.org/wp-content/uploads/2020/10/CBA_Logo_top_main.png 0 0 Wendy Schumer https://cascadebluesassociation.org/wp-content/uploads/2020/10/CBA_Logo_top_main.png Wendy Schumer2014-01-30 16:08:472014-03-20 20:26:42CANCELLED DUE TO WEATHER: February General Membership Meeting . . .