It’s a new year and we’ll be starting a whole new line-up of great blues performances for our monthly meetings, guaranteed to bring exciting good times for all in attendance. Always the best way to start each month to wet your blues appetite while hanging out with friends and fellow blues appreciators.

Opening the night will be Dave Mullany, a guitar player with roots that extend across the United States. His early days of playing 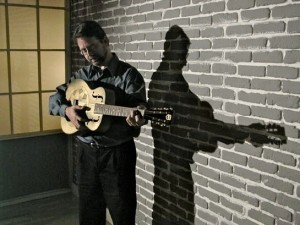 consisted of covering rock and blues styles in upstate New York starting in 1968, with local Woodstock musicians like Paul Butterfield and Levon Helm serving as inspirations  After moving to New York City in 1977, he had the opportunity to play with Bo Diddley for all of his NY dates and opened shows for artists like Muddy Waters, Jerry Garcia, Jorma Kaukonen, and Sonny Terry & Brownie McGee. His recording experience includes work with Rolling Stones producer Jimmy Miller, session work with Shawn Colvin, radio and TV work as well as a national film, Hells Angels Forever, that featured music from Jerry Garcia, Bo Diddley, and Willie Nelson, and he performed shows at The Palladium, Roseland Ballroom, CBGBs, The Lone Star Café, and Studio 54.

Mullany moved to Portland in 1991 and has spent the past twenty-four years honing his love of the blues. He’s played clubs and shows with local heroes Ellen Whyte, Terry Robb, Mary Flower, and Kevin Selfe and currently gigs with the Angel Bouchet Blues Band as well as performing solo. Mullany has also been teaching music for over twenty-five years with a resume that includes work alongside masters like John Renbourn, Jorma Kaukonen, Woody Mann, Mary Flower, and John Cephas.

For his CBA performance, Mullany will be joined by a couple good friends. First, an artist who needs no introduction to our members, Kevin Selfe, a Muddy Award Hall of Fame member who constantly works the Pacific Northwest and beyond. Selfe recently released his latest recording, Buy My Soul Back on the VizzTone Records label to high acclaim and he has appeared at many major festivals around the country as well as performing onstage at the Blues Music Awards in Memphis.

Also joining Mullany will be Nayibe “Geebs” Rojas. As the lead vocalist for the funky Portland band Ma Fondue, she is known for delivering high energy performances. She has also performed with Sonny Hess’ NW Women Rhythm & Blues at the Waterfront Blues Festival as well as their Annual Christmas Show last year. Geebs met Dave Mullany over 15 years ago when she enrolled in 1 of his Beginning Guitar classes and has often joined him onstage as a guest vocalist.

As our second act for the night, we will be entertained by a true Chicago style blues band, The Tablerockers. As their website declares: “this is the real thing, post-war blues of the ’40s through ’60s. No rock blues, no funk blues, no disco blues, or any other watered down or hyped up blues hybrids.” With a songlist heavy with blues standards from the likes of Muddy Waters, Howlin’ Wolf, Little Walter, Junior Wells, Magic Sam, Buddy Guy, Otis Rush, Hound Dog Taylor, T-Bone Walker, and others. We may even be treated to a few of The Tablerockers’ original songs. 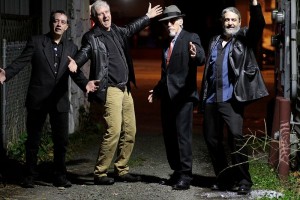 The Tablerockers were formed after guitarist Harvey Brindell moved to Portland from Lincoln, Nebraska this past year. For more than twenty-five years Brindell had been performing with a variety of bands that toured throughout the Midwest and Midsouth and recorded with the Honeyboy Turner Band on a couple of albums. He has played regularly at Lincoln’s famed Zoo Bar and has many shows for touring blues acts including the likes of Magic Slim & The Teardrops, Mike Zito, JW Jones, Jimmy Thackery, Smokin’ Joe Kubek, and even Portlanders Kevin Selfe & The Tornadoes, and Mitch Kashmar.

Also featured in The Tablerockers are well-known Portland blues musicians Walter Guy on bass who has led his own popular band for a number of years, harmonica man Marty Presler who has been a part of a number of bands in Southern Oregon and is a regular part of Arthur Moore’s Harmonica Parties, and rounding out the band is Sean Scheewe, a drummer who has toured the West Coast consistently with rock and country bands and part of the spot-on rhythm section known as The Dirty Lowdown.

Two great acts set to kick off 2016 just the right way for our monthly meetings. Don’t forget to pick up your ticket for the break time drawing, and perhaps buy a ticket or a few for the multi-CD winner-take-all raffle. You know that the meetings are always a good time, so what’s keeping you away? Come on out and join your friends in a good time filled with fantastic blues!

Now Being Accepted Applications For 2016 Journey To Memphis