Hey everybody, hope you noticed that date for the meeting right off so you do not show up a week too early. You should be home with family, watching football, recovering from partying too much the night before or whatever you like to do on the holiday, so the meeting is pushed back one week.  But we guarantee that that extra week will be well worth the wait as the Cascade Blues Association begins year number twenty-eight of supporting, promoting and preserving the blues in our region. One way that we do this is by offering two great sets of music at our general membership meetings each month and we believe you’re going to truly enjoy the acts we have for January. 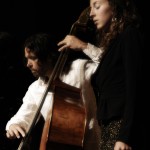 Opening the night will be Julie Yanko & Dean Mueller. The pairing of a Jazz vocalist and upright acoustic bass is a magical combination that leaves nowhere to hide. It is a setting reserved for the most qualified artists, a mingling that Julie Yanko and Dean Mueller bring together with unexpected delight. Julie is a strong yet sweet voice reminiscent of the 50’s when female singers ruled the jazz and blues world of music. Her repertoire combines the jazz of Billy Holiday with the soul of Nina Simone and the sophisticated country of Patsy Cline. Dean’s bass playing is rooted in the blues chops he earned playing with the finest blues legends in America and touring with the award winning international act, The Insomniacs. Over the last couple of years the pair has been performing as a duo or collaborating onstage with other northwest artists such as Curtis Salgado, Alan Hager, Chris Carlson, Henry Cooper, Dave Fleschner, and Alex Shakeri. Each situation brings out a different vibe and freshness that new relationships tend to do. At January’s CBA meeting the pair will be teaming up with Chris Carlson, a Northwest guitar master and bandmate with Dean in the Duffy Bishop band. Come join us as this trio brings a fresh take on a bygone era that is intimate, alluring, and hauntingly beautiful.

For the second set we have invited back one of Portland’s finest guitarists, Jesse Samsel. He 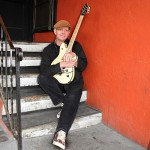 has worked with many exciting acts over the years, both locally with the likes of Meredith Brooks, Paulette Davis, Steamy Windows and recording and toured the world with renowned artists like Ry Cooder, Bobby King and Terry Evans. This past year Jesse has been working as Jesse & The Loopers, which is actually Jesse doing all the parts by looping the tracks, something that he may be the only blues artist pursuing this direction. But for the meeting, Jesse is planning on bringing a band with him, so you should expect to hear that great solid rock and danceable blues that he is known for. He is also hoping to bring copies of a new CD that he has titled Blues Notes, which will feature all the songs that he recorded with people like Ry Cooder and Terry Evans that they allowed him to solo on. Sounds like a very cool collection for sure. Whatever setting you find Jesse Samsel in, you know that he is going to bring all he’s got, never a dull moment and entertaining for certain.

Remember to pick up your free drawing ticket as you enter the venue for a chance to win great prizes. We’ll also have another multi-CD package with tickets to win it all going for only $1.00 a chance, with the funds all going to help the Cascade Blues Association offer nights like these meetings and many other exciting projects throughout the year.

Hope to see you all there!