They say that March blows in like a lion. Well, that just may be true when it comes to great blues happening this month at the Cascade Blues Association meeting, as we provide another pair of terrific blues acts to open the month just right.

Our first act of the night will be the acoustic duo of Missi & Mister Baker. Missi Hasting and John Baker are a Portland based roots, blues and rock pairing specializing in acoustic guitars with a hefty dose of slide.

Missi grew up in the foothills of the Smoky Mountains in Maryville, TN, where she began singing as a child in Baptist gospel choirs and as a duo with her stepfather, a minister and talented guitarist. She also learned to harmonize at the feet of Tennessee musicians who cared as much about crafting instruments as they did about the songs themselves. Relocating to Austin, Missi developed a deep love for the blues and promoted shows for the city’s only remaining Chitlin’ Circuits-era blues at The Victory Grill before migrating to Portland after her children had grown.

Mister Baker is a soulful practitioner and interpreter known for his lap steel and bottleneck work on traditional roots music including blues, old timey, folk, country, Hawaiian, and rock. He considers himself a musician’s musician and a guitarist’s guitarist. He prefers to keep quiet and play the guitar, and he utilizes a number of different style guitars in his performances, including a Dobro, and a homemade Hawaiian koa wood Weissenborn-style lap guitar with a hollow neck. The duo format with Missi allows him to be more front and center, rather than just lurking in the shadows. John has played in several local bands over the years as a sideman and under the radar.

Missi and John met in 2011.  On their first date while walking along the Willamette River, a large fireball fell directly in their line of vision. “We both felt like it was some kind of sign,” says Missi. Later that evening they started playing guitars together and they’ve been making music ever since. The pair released their debut EP, Where Black Ravens Flew, in 2014, a collection of original songs along with two obscure roots tunes. 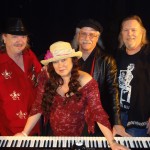 The second set of the night will bring back the 2014 Muddy Award winners for Best New Act, Tracey Fordice and the 8 Balls. Fresh off their trip to the International Blues Challenge, where they represented the Ashland Blues Society, this dynamic four-piece band is set to deliver a sound unique in the Portland area.

Their main attraction is Tracey Fordice! Her vocal delivery and stylish piano playing is smooth, yet powerful, and gives emotional depth to every song she performs, from a soulful ballad to a rockin’ Blues tune. Backed by the fiery guitar work of Randy Yearout, along with the powerhouse rhythm section of Steven Mills on bass and Johnnie Corrie on drums, the group works to produce a fresh and original Blues sound that is sure to please audiences both young and old.

In addition, guitarist/vocalist/producer/recording engineer David Alvey will be joining the band for the performance at this month’s CBA meeting. David is co-producing their upcoming CD of all new original material which should be out in late March or early April. Both Tracey and Randy are very talented songwriters in their own right, but in this project they are collaborating together in many of the tunes. Steven Mills is also contributing his songwriting talents in this project. This show will be featuring many of the songs from the new CD.

As a Blues Band, Tracey Fordice and the 8-Balls strives to create fresh, new material that is rich in “Blues” content and styles similar to traditional Blues, but with their new, contemporary twists added to it, along with creative, and topical lyrics. They have always branded themselves as Blues/Rock, but they are influenced by many other genres and it shows in their musical presentation. Their goal is to be contemporary, and to perpetuate the Blues genre into the future without simply repeating its past.

The band has a regular standing Tuesday night jam that they host at The Lehrer, so if you cannot get enough of this fun group, swing out to the West Side every Tuesday night and check them out.

So make sure you head out to The Melody Ballroom on Wednesday, March 4 for another fun night with friends and blues. Free ticket drawings and our multi-CD winner take all raffle will be held as usual. It’s the best way to start out every month if you’re a blues lover in Portland.