Normally we offer a pair of acts that might include one well-established group or performer, while we also introduce an artist or band people should be aware of from the ever-growing wealth of regional blues talent. But this month is an exception. Two well-known and highly acclaimed performers from the Northwest will take the stage, making May’s gathering one of the most amazing nights at a Cascade Blues Association meeting. This is a meeting not to miss. 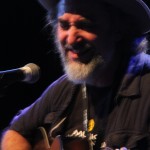 Opening the night will be one of the most innovative and creative acoustic guitarists, not only in Portland, but anywhere. Joe McMurrian takes the values and traditions of the older blues artists of the Delta or the Piedmont and brings them to life with his own modern outlooks. Be it acoustic or electric with his band Woodbrain, McMurrian develops catchy and hypnotic music that is driven by his fleet fingerpicking and slide playing and master storytelling. Twice selected by the Cascade Blues Association as their entry into The Blues Foundation’s Best Self-Produced CD competition, McMurrian each time reached the five finalists and took home the overall prize for his incredible 2010 release Get Inside This House.

Currently, McMurrian has released two new discs simultaneously: Old Blood which offers exciting new material recorded in a cabin where he secluded himself from the rest of the world for a few days to create and his first ever live recording, Live At The Aztec Theater. Both are as superb as we would imagine from the brilliant mind of such an artist. Expect to hear several selections from these albums and his previous releases during his set at the CBA meeting in May.

For the second set, we’ll also be treated with a visit from Sammy Eubanks. Coming to Portland all the way from the Spokane/Couer d’Alene area, Sammy has been recognized multiple times as one of the Northwest finest vocalists and is an outstanding guitarist. Sammy Eubanks, who is often referred to as “The Voice,” is quite possibly the most reputable musician in Eastern Washington and Northern Idaho, where, along with the late Ted Todd, he helped develop the Inland Empire Blues Society. Sammy Eubanks delivers a quality performance every time he takes the stage, playing a variety of Blues, Country and Rock n’ Roll Classics as well as originals. Influenced by many artists and styles, he too demonstrates diversified talent rarely seen in music today. 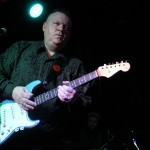 Sammy Eubanks’s band is also a powerful working trio in itself. Joining him are bassist Dave Nordstrom and drummer Michael Hays, and as stated on the band’s website, they make up the swingin’est rhythm section in the business.

Accolades for Eubanks speak volumes as well, when you consider people like James Harman refers to him as “The Real Deal” and Sunbanks Blues Festival producer Billy Stoops explains that “if you look up COOL in the dictionary, you’ll see this cat’s picture.”

Do not miss this meeting. You’ll be very sorry if you do. You get two of the Northwest’s premier artists in one evening, plus your chance to win prizes by attending, too. It doesn’t get much better than this.

GET DOWN JONES:  High-Octane, Home-Grown Portland BluesIt Takes A Village: Help Bring Our Baby Home Benefit Concert Set For May 16
Scroll to top