Alright, so we’re rolling into the Fall after a fantastic summer filled with all sorts of great blues music. But there’s no reason to stop going out to see blues music because the weather may be changing. In fact, it should be even more in mind. And living here in the Pacific Northwest, our own little blues mecca, we can certainly catch superb blues musicians just about every night of the week if we’d like. As usual, the best way to start each month off is with your friends down at The Melody Ballroom for the Cascade Blues Association’s General Membership Meeting. Each and every month we bring to you two sets of terrific blues music, whether presented by old friends or new acts you’re just getting to know. The talent in our area is beyond approach and you’re most likely going to enjoy those we have to offer. 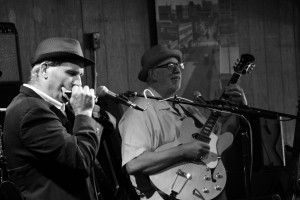 This month we’ll be bringing up a couple of good friends from Southern Oregon with the acoustic duet of David Pinsky & Broadway Phil Newton. Both are very accomplished artists in the own right with various bands, but together they bring a truly flavorful blend of blues on guitar and harmonica. David has been the band leader for The Rhythm Kings, one of the most popular bands around the south part of the state. He formed the group twenty-five years ago and they’re still going strong, but lately David has focused more on his acoustical side with projects like this one with Phil Newton. Phil also fronts his own successful band, Broadway Phil & The Shouters, who are also in their second decade together. The two band leaders work exceptionally well with one another as an acoustic duet, as seen recently during the CBA’s Journey To Memphis competition at The Trails End. They have a lot of fun working with each other and it carries over to the audience as well. Sure to be a memorable set. 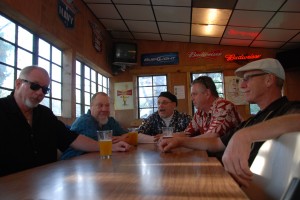 For the second set of the night, Symplistic Soles will be heading up the Willamette Valley to bring us a showing of their exciting mix of blues, R&B, soul with a touch of Motown. This is a seasoned group of musicians who play the tunes that most bands wouldn’t. The band is made up of Extra Crispy on guitar, The Professor Scott Fels on keyboards, Mighty Mo Dorsey on bass, drummer Kevin Dixon, and Steve “Guido” Magnolia on harmonica, toys and vocals. This band is set to get you on the dance floor and to have a good time. We’re certain that they’re going to do just that.

Between sets we’ll do our popular free ticket drawings for CDs and other fun prizes. Get your ticket at the door as you enter. We’ll let you know all about the big to-dos going on around the area in September and we’ll also hold our multi-CD raffle drawing that you could be the winner of for only a $1.00 a chance. Don’t miss out on one of the fun events happening in town each month. Hope to see you at The Melody!!