You are here: Home1 / General Meetings2 / What’s on Tap for the August General Membership Meeting . . .

You can always count on some smokin’ hot blues happening each month at the Cascade Blues Association’s general membership meetings and this month will certainly be no exception. Normally we offer a set of acoustic to open the night followed by an electric set. But this month we’ve changed things up a little bit, as we do on occasion, and will have two bands performing. 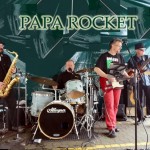 Opening the night will feature some old friends that have played in a couple of the most popular bands from the past, Papa Salty and the Hudson Rocket Band. Papa Rocket is fronted by the “Papa” of Papa Salty himself, Tim McAllister on guitar and vocals. He will be joined by three former members of the Hudson Rocket Band, Mike Taylor on bass, Ron Solomon on keyboards and saxophone, and founding member of the band Ken “Honeybucket” Johnson on drums and vocals. This is sure to be an exciting set, featuring classic blues tunes, fresh material and more than likely some of your favorite numbers from Papa Salty and Hudson Rocket.

The second set of the night will feature a new act that is sure to entertain blues fans, Martin Henry & The Blues Benders. Celebrating the August release of their debut recording, Long Time Coming, this five piece outfit is a combination of skilled veteran musicians. Led by  Martin Henry Heikkila on harmonica and vocals, who is also the main songwriter of the group, he has played blues for more than 30 years, sharing the stage with the likes of Vicki Stevens, Paul deLay and Jacob’s Ladder. Also in the band are guitarist Delmar Niemi, percussionist William Ebert, bass player John Drury (who has worked with The Sons of the Pioneers and Boxcar Willie), and popular local keyboardist Tim “The Deacon” Doyle (formerly with the Robbie Laws Band, Undercover, Lori Bouck & The Interpreters and Sonny Hess’ Power Band, among others). The Blues Benders are set to bring the crowd to their feet with their new material.

Of course, between sets we will hold our ever-popular free ticket give-away drawings, so make sure you pick up your ticket at the door as you enter the venue. We will also let you know about all the cool happenings going on in the area for August. If you’re feeling really lucky, you can also purchase tickets for $1.00 each for a chance to win a multiple-CD set put together just for the meeting. Money raised by these ticket sales help the CBA in a variety of ways, most importantly now with the upcoming rent we will have to pay for office space.

Come on out for an early night, or maybe start your blues night off at The Melody Ballroom if you have plans of going out later, too. Always a fun time spent with good friends and listening to some of the best blues musicians in town. Hope to see you all there.