For those members planning on attending the December General Membership Meeting who are reading the BluesNotes prior to the meeting, please remember to bring your current membership card with you. It is election time and having your card makes it easier to hand out the ballots without having to look up your name and status. Every December we vote for the leadership of your Cascade Blues Association; the positions we will be filling for 2015 are President, Vice President, Secretary, Membership Secretary and Treasurer. Please plan on attending this meeting and casting your vote.

Opening the night for us at the meeting will be somebody we have been seeing an awful lot of lately, Rae Gordon. For those who may not be aware, the monthly meeting calendar fills up pretty quickly for the year and it’s not unusual to have all the spots filled by the first of the year. Thus when Rae booked this date, we had no idea that her band would win the Journey To Memphis competition, meaning a lot of fundraising going on to make ends meet for traveling to Memphis for the International Blues Challenge.

But we are totally okay with seeing Rae so often. She is, after all, the Duffy Bishop Female Vocalist of the Year from this year’s Muddy Awards and you just cannot get enough of the fun effervescence she emotes on stage. This will be a special acoustic holiday set with Rae and friends singing Christmas and holiday classics, in a bluesy way I’m sure. It is a teaser for the big showcase she will be hosting at Jimmy Mak’s with an all-star gathering on December 13th. Included in her cast of friends for the CBA meeting will be her band leader and songwriting partner Gaddis Cavenah on guitar and one of Portland’s most amazing vocalists LaRhonda Steele, blending her own bluesy-gospel voice along with Rae’s. This has all the makings of a really fun set that you’re not going to want to miss.

The second set of the night will bring a new face to our meeting line-ups, Barney “Get Down Jones” Murnin. Born and raised in Portland, guitarist and vocalist Get Down Jones has been playing blues roots music for over 15 years, citing some of his biggest influences as Howlin’ Wolf, B.B. King, Albert King and Robert Cray. With a deep appreciation for roots music he states, “I believe that many great Americana roots musicians never made the transition to CD, and I would like to refresh some of those original contributions to music. First and foremost I am a fan and musical archivist with a foundation in America’s major contribution to music globally, the blues music can unite us.”

The band have written some great original songs as well to develop for an album, but for the most part the live show consists of some really treasured and great blues songs from some of the founders of American blues. Get Down Jones takes great care to recreate these songs in the original form and flavor, however, their Portland style and his swagger does seep into the songs. “We put some stank on it, but for the most part we give praise to the original artists of the blues.”

Joining Get Down Jones for his CBA debt performance will be members of the band’s most recent line-up that includes guitarist Bobby Poet, bassist David Baulding, Richard Sanders on keys, Sean Derrickson on organ, Chck Gilman on harmonica and vocalist Lisa Kent Baker 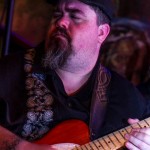 Get Down Jones is passionate about his performances and the onstage dramatics reflect his feeling of the blues and its emotion. Get Down Jones’ live shows are energetic and original and exactly what you need to feel good about your entertainment night out.

Of course, we will also hold our free ticket drawing to win CDs and other prizes, so do not forget to pick up your ticket at the door. And we’ll also have the winner-take-all $1.00 ticket drawing for your chance to win a 9-CD packet.

Do not miss out in December as we choose our CBA leadership for 2015 and a night of memorable music doesn’t hurt either. See you there.