Due to the Waterfront Blues Festival taking place the first weekend of July, the Cascade Blues Association’s Board of Directors decided to push the General Membership Meeting for the month one week back. This allows us to prepare the night before the festival begins by setting up our merchandise booth and last minute run-arounds to make sure all is ready. But we will be back that Wednesday following the festival, on July 9th with another fun-filled night of great blues and socializing with our friends. 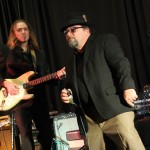 The opening set for the 9th will feature two of the front men from one of Portland’s most popular acts, Franco Paletta and his Stinger bandmate, guitarist Jason “JT” Thomas. The pair have been working together for more than two years now, including making the trip to Memphis where the band competed in the International Blues Challenge representing the CBA in 2013.

It’s not often that we get the opportunity to hear this pair in an acoustic duet setting. And this summer has The Stingers playing fairly consistently stretching far outside the Portland area, so this may be a great chance to catch up with Franco and Jason. That schedule will include dates doing the opening set at the Bronze, Blues & Brews Festival in Joseph, Oregon; The Durango Blues Train in Colorado and a show at the famed Biscuits and Blues club in San Francisco.

Franco Paletta is one of the area’s finest harp players, a strong vocalist and an exceptional songwriter. That was clearly displayed on The Stingers most recent CD I Like It Just Like That. Guitarist Jason Thomas also proved that he can craft a song as well, as shown on the same disc with his composition “Living The Blues Again.” But aside from Thomas’ songwriting, his guitar playing is captivating electrically, we can hardly wait to see him on acoustic.

Beckon the Blues has been playing blues tunes together since 2011 and they’ll be joining us for the second set of our meeting.  The band formed out of their immense enjoyment and love of guitar-driven, soul-searchin’ rhythm and blues from different eras stretching over 70 years.  They have been playing cover tunes together for over 8 years, but 3 years ago they decided to focus exclusively on the blues, with both original and cover tunes to round out their set.  In November 2013, Beckon the Blues debuted their first show in Portland and they have been entertaining the blues lovers at various shows ever since. 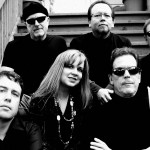 Each band member brings their own long history in the music industry.  Chelle has been performing in various genres in the Portland area for over 20 years, and has become known for her soulful style and powerful vocals.  She has been greatly influenced by her childhood church (Maranatha in NE Portland) and popular singers such as Mahalia Jackson and Etta James.  Christian Perales has a deep appreciation for the early blues of the 20th century.  His bass playing reflects the steady, understated bass riffs of that era.  Ken Price is the most recent addition to the band, bringing the full, rich sound of the keyboard, strong back-up vocals and a greater dimension of soul to the sound.  Jim Ruff has played the drums since he was a teenager in Chicago, playing professionally in Rock and Roll and blues groups on the East Coast and Midwest.  His experience behind the kit shows when he plays, never missing a beat, even when he sings back up!  Chris Toole has been playing since the 60s and covers rhythm guitar, slide guitar, harmonica, and back-up vocals. He is the predominant song writer for the band and has a great love for all types of blues and jazz.  Jake Wilson takes full charge of lead guitar and is never one to turn down an opportunity to wail.  His finger-blistering leads stem from a wide range of blues influences of Texas Blues, Delta Blues and good old fashioned Rock and Roll.

Without a doubt, Beckon the Blues is a force to reckon with and a guaranteed good time!

Remember, pick up your free drawing ticket as you enter the venue. You don’t want to miss out on your chance on winning a CD or other prizes just by showing up. And you can also purchase tickets for our winner-take-all multi-CD raffle; tickets are just $1.00 each.

Don’t forget, the meeting is the second Wednesday this month only. We’ll be back on our routine first Wednesdays starting back up again in August. We know that four days at the Waterfront will just whet your appetite for summertime blues. We can help ease that craving at our meeting.

We’ll see you there!!