As the Cascade Blues Association’s thirtieth anniversary gets nearer, it is often fun to think back on many of the memories that the organization has put together to promote our local musicians. Many of those happen each month with our General Membership Meetings where we have introduced new artists that have since become some of the region’s and nation’s top performers as well as bringing familiar friends who just want to play for our members and say thanks. The October General Membership Meeting is shaping up to be one that you’re not going to want to miss. We’ll be bringing two of our favorite bands performing in a new format that is sure to offer excitement, fun and a reason to get up and dance.

Opening the night will be The Tracey Fordice Band. In their previous incarnation as a Tracey Fordice & The 8-Balls, they received the 2014 Muddy Award for Best New Act as well as represented the Ashland Blues Society at the International Blues Challenge in Memphis. For the meeting the band will be performing in a special acoustic setting, with Tracey helming the piano and vocals, Randy Yearout on guitar, Todd Ommert on bass, Johnnie Corrie on congas and percussion, plus special guests George Discant on harmonica and James Toussaint on fiddle. Tracey and the boys will be acoustically performing selections from their latest recording, Out Of The Blues. Always a fun time to be had whenever the Tracey Fordice Band performs with their catchy and often humorous tunes

The second set of the night also is sure to get the room jumping. Fresh off their appearance at the 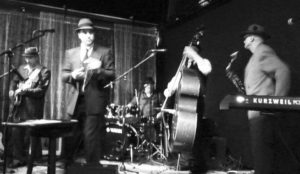 Waterfront Blues Festival as a Journey To Memphis finalist and the CBA Picnic, we will welcome the return of The Beacon Street Titans. The band that delivers the feel of the jump blues sound from Kansas City along with a bit of West Coast swing always get the audience dancing. The group will be a little smaller than you may have seen them before, as they’ll be working as a quartet for the meeting with Howard McClung on vocals, harmonica and saxophone, Daryl Boggs on guitar, Bill McNamera on drums and Steve Malski holding down the bass. The band has described their sound as Roomful of Blues meets the Squirrel Nut Zippers — now that’s a tasty combination.

We’ll keep you up to speed on what’s going on and coming up in our local blues scene for the month and hold our popular free ticket drawings for prizes (don’t forget to pick up a ticket as you enter the venue). This is the place to get your monthly kick-off for blues and to meet up with good friends. This is always a fun night, and we’ll see you there!