You’re definitely going to want to attend the October General Membership Meeting for the Cascade Blues Association as we present performances from two of the region’s premier blues women in what is sure to be one smokin’ night of great music.

Opening the night, heading into town for this meeting from the Columbia River Gorge will be the duet of Tess & Patrik Barr. This is a very rare performance as they usually do not play in a duo format. 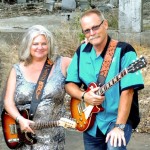 Tess is a vocalist, songwriter and guitar player who has been singing her entire life, who went through phases of country and rock music before discovering the blues in the 70s. Influenced by the likes of Koko Taylor, Katie Webster, Janis Joplin, Elmore James, Junior Wells and Hound Dog Taylor in her writing and singing style, she has recently been creating her own original material, many of which can be found on her outstanding release from earlier this year, Do What You Want.

Joining Tess for this set will be her husband Patrik, best known for his electric slide work, he also plays harmonica, banjo and fiddle along with guitar. A one-time member of the Seattle old time music scene, he has also spent time in Ireland where he took up playing Irish music. He has been playing with Tess’ bands now for the past twenty years as well as co-writing much of her material.

Aside from playing the blues, Tess & Patrik also own and operate Hood Crest Winery and have been working on a follow-up recording to Do What You Want, titled Trouble’s Comin’.

For the second set of the night, we will feature one of the most popular acts in the Portland area, Lisa Mann & Her Really Good Band. A multiple 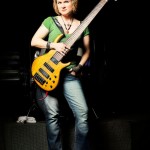 recipient of the Muddy Awards, including Hall of Fame status as bassist, Lisa is also a nominee in this year’s Blues Blast Awards for the Sean Costello Rising Artist Award. The band has been busy this last summer working the release of the latest recording Move On, taking Lisa all the way to New England and the Big Blues Bender in Las Vegas.

The Really Good Band will feature a slightly different line-up for the meeting as regular drummer Michael Ballash works during the week teaching and Brian Harris will be on tour with Curtis Salgado, so the ever reliable Dave Melyan will be handling the drum position alongside the extraordinary guitar skills of Jeff Knudson. Though not known for certain at press time, Patrick McDougall may be joining the band for the night on keyboards.

And as always, make certain to pick up your free ticket at the door for a chance to win CDs, concert tickets and other prizes. There will also be a winner take all raffle for a $1.00 per ticket chance to win a multi-CD package put together just for the meeting.

Hope to see you all there for another night of good friends and great blues.