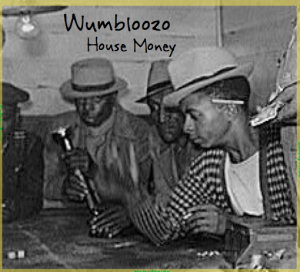 Every now and then I have a CD passed on to me by a band I am not familiar with that really catches my ear. At this year’s Waterfront Blues Festival a disc from the Los Angeles-based band Wumbloozo came in my direction and when I gave it a listen I was immediately ensnared by the instrumentation and stories that their songs relayed.

The tunes are all originals filled with down on their luck individuals written by guitarist/vocalist Michael Richard. They’re moved along by nice, tasty string work from Richard accompanied effectively by guitarist Gary Krueger, Stan Harrison’s keys and the harmonica play of Herbie Katz who sadly passed away shortly after this album was recorded. Strong, steady rhythm is kept by drummer Ben Beckley and bassist Mark Peters. And the band is just at home playing acoustically or electric

There are a various number of approaches the band takes with their music from traditional blues to even a country flavored rock direction such as the song “House Money.” “Night Train” offers slide guitar, drums and low-churning harp to bring across the feel of the train building a quicker pace and more powerful as the song flows through. Humor is often the theme of Richard’s lyrics, such as in “Poh Boy” where he talks about his 103-year-old girlfriend. The song has a New Orleans styled piano base and dual guitars.

The stories of the songs are easy to bring to vision. “Losin’ Ticket Blues” finds the protagonist at the race track losing his shirt on a horse named Knocking Knees who’s more concerned with his fleas than racing. But our hero doesn’t so much mind losing his shirt, but why did they have to make him walk home without his shoes, too?

On “Lucky 13” the main character was born on the 13th, the 13th son, even with a birthmark that resembles the number 13. Unlucky? Not in his mind. He feels like he’s the luckiest man alive. The song shuffles with nice harmonica and somewhat growling vocals.

“Wake Up Daddy” is a jumping piece, kicked in the shins with her alligator shoes, but as long as she doesn’t have to use her pistol everything will be alright. The song breaks into a live setting taking on a slow blues with biting guitar and yet more throbbing harmonica. “Cadillac Rag” opens with a Muddy Waters “Can’t Be Satisfied” intro, once again finding the hero with woman trouble as his girl prefers his second cousin to him.

There is plenty of material here that is over the top good. It is easy to understand how they can be such a popular act in Los Angeles and leaves me with a desire to perhaps see them perform sometime if the opportunity arises. They cover a lot of musical direction and do it all very well.