Bluegrass, Swing, Hot jazz, Pre-war blues, Southern soul, New Orleans funk — the Dustbowl Revival is an American roots orchestra with eight full-time members — and they play it all, mashing the sounds of traditional American music into a genre-hopping, time-bending dance party that coaxes fresh fire from familiar coal. But this isn’t a throwback band; it’s a celebration of the sounds that have kept America moving for more than a century, performed with all the flair of a medicine show and rooted in the sweat and swagger of a juke joint song swap. Their latest album, With A Lampshade On shines brightest in that middle ground, the place where jazz, folk, gospel, and blues all intersect. This is a band that is participating in the evolution of American roots music, tipping a hat to what has come before while looking ahead to what’s on the horizon.

The Dustbowl Revival has been on an extensive tour crossing the country and will be making a stop in Portland for one night at the Doug Fir Lounge on Monday, May 2. This 21 & over show will begin at 9:00 pm with an opening set from Portland’s own story-telling roots artist McDougall. Tickets are available in advance for $10.00 and $12.00 at ticketfly.com. The Doug Fir Lounge is located at 830 E Burnside.

Seventy-five years ago, folk player and American songwriting icon Woody Guthrie spent time in Portland recording a series of songs about the Columbia River and the people of the Northwest for the Bonneville Power Administration. Seventeen of those songs were originally recorded, some that have become legendary examples of American history, such as “Roll On Columbia,” “Hard Travelin’,” “Grand Coulee Dam” and “Pastures of Plenty.” But there were still nine more written that have not seen any release up until this time. To recognize Guthrie’s groundbreaking work, author Greg Vandy will release the book 26 Songs in 30 Days along with the recordings of several Northwest musicians who gathered to record all twenty-six of the songs. These musicians include former BPA official and folklorist Bill Murlin, Seattle’s International Blues Challenge winning duo Ben Hunter & Joe Seamons, singer Jon Neufeld, and the band Timberbound, the latter two hailing from Portland, among other artists. Beginning in May, there will be numerous book and concert events taking place honoring the Northwest music of Woody Guthrie and influences that will continue throughout the year.

It will all start on May 9, at The Lake Theater & Café, 106 N State Street in Lake Oswego with a concert and story-telling featuring Ben Hunter & Joe Seamons along with Timberbound. Show time is 7:00 pm. General admission tickets are $20.00 and may be purchased in advance at latketheatercafe.com.

This concert will be followed up by a presentation at the Columbia River Historical Center in The Dalles, Oregon on May 20 and events at the Grand Coulee Dam on May 28 and at the Northwest Folklife Festival in Seattle on May 30.

When legendary gospel titans The Blind Boys of Alabama perform, it’s a roof-raising musical event. Their soaring voices and powerful energy have been thrilling crowds around the world for seven decades. They’re stronger than ever, and this five-time Grammy Award winners can be counted on for a truly uplifting experience. With multiple Grammy Awards for traditional gospel recording and the prestigious Grammy Lifetime Achievement Award, the band first formed at the Alabama Institute for the Negro Blind in the late 1930s and original member Jimmy Carter still performs with the group today. Touring throughout the South during the Jim Crow era of the 1940s and 1950s, the Blind Boys flourished thanks to their unique sound, which blended the close harmonies of early jubilee gospel with the more fervent improvisations of hard gospel. In the early 1960s, the band sang at benefits for Dr. Martin Luther King, Jr., and were a part of the soundtrack to the Civil Rights movement.

The Blind Boys Of Alabama will be appearing at the Arlene Schnitzer Concert Hall, 1111 SW Broadway, on Friday, May 13 at 7:30 pm. Tickets are available in advance at tickets.orsymphony.org ranging from $20.00 – $55.00.

In May, Blues Music Award and Sean Costello Rising Star winner, and Cascade Blues Association Muddy Hall of Fame member Lisa Mann is releasing her newest album, Hard Times, Bad Decisions. To celebrate, on Friday, May 13 Lisa Mann will be holding a CD release party at The Rose Room. The new disc is filled with special guests and Lisa has invited a few of her good friends to join her at the party. Alongside will be Her Really Good Band members JT Thomas on guitar and Michael Ballash on drums (sorry Brian Harris will be touring with Curtis Salgado at the time), Lisa has invited Andy Stokes,  Patrick McDougall, Ben Rice, Louis Pain, and Dave Melyan to take part in the event.

The new album features eight new original tracks and four covers. All bring Lisa’s wide range of styles, from swampy blues-rock to old school soul to classic jump swing, all tied together with her signature bombastic delivery.  Make a point to pick up your copy at the party!

The Rose Room is located at 8102 NE Killingsworth Street. Advance tickets are on sale through brownpapertickets.com for $10.00 general admission, $15.00 reserved seating ($15.00 meal purchase required) and $250.00 for the Group VIP Platinum Package that is limited to 10 people; includes 2 bottles of champagne, 2 comp appetizers, VIP room access with private server. This is a Cascade Blues Association co-sponsored event and by showing your current membership card you can receive a $1.00 discount on admission at the door only. This is a 21 & over show.

The 20th annual Untapped Music Festival will take place in Kennewick, Washington on the weekend of May 13 & 14. The performances begin on Friday night at the Clover Island Inn with a show featuring Commander Cody. The main festival then moves over to the Benton County Fairgrounds on Saturday where blues performers will include The Delgado Brothers, Hamilton Loomis, Lloyd Jones, Ben Rice, and Billy Stoops and The Dirt Angels. The festival is a mix of blues and country/rock music on two stages. For more information including ticket prices and lodging, visit their website at untappedblues.com.

Driven by a fierce independence, unified by family, and fortified by the brotherhood of music, the Delgado Brothers deliver the musical goods: topical, anthem-worthy songs complemented by call-to-action lyrics and East L.A. Soul.  For over 30 years the Delgado Brothers have been music makers, collaborators, and ordinary citizens; raising children, grieving the loss of parents, marrying and divorcing.  All of this life experience may explain their flare for illuminating everyman’s joys, sorrows, triumphs, and losses. A wide spectrum of people, undivided by culture, age, or socioeconomic status, have long embraced The Brothers’ music.

Often referred to as Los Angeles’ best kept secret, The Delgado Brothers stormed to the blues world forefront this past January as they captured the title at the International Blues Challenge and brother Joey took home the prized best guitarist trophy. No strangers to the Northwest blues circuit, the Delgado Brothers have been headlining festivals and venues throughout the region. To witness a Delgado Brothers live performance is to testify to the synergy, emotion, work ethic and true musicianship of the band.

Then, on Monday night, May 16, the Delgado Brothers will be joining Jonathan “Oogie” Richards for a remote live broadcast of NWCZ Radio from The Birk, starting at 6:30 pm. Doors open at 4:00 pm and admission is $10.00. And during the broadcast, two free tickets to the Sunbanks Music Festival will be given away.

You might recognize young Javier Colon as the initial winner of the television show The Voice, but Colon has been bringing his “acoustic soul” style of music to audiences before that as a member of both the funk band EMCQ and the Derek Trucks Band. Deciding to take on his own solo career, he has created his own unique style of music blending R&B, folk, soul, rock, and country with his stunningly soulful voice, uncanny writing ability, and a commanding stage presence. With a handful of solo recordings, including the 2016 release Gravity, he has currently embarked on an extensive tour schedule taking him across the country.

Texas-born Hamilton Loomis is the son of musician parents who exposed him to blues, rock, and soul, so it’s no surprise that music ran in his veins. With instruments readily available around the house, he mastered multiple instruments while honing his musical skills performing regularly as part of

his family’s doo-wop group. While still a teenager, Loomis met the legendary Bo Diddley, and the two became close friends. He learned how to entertain and take command of a stage through Diddley and has always followed the advice given him by the elder bluesman to “innovate, don’t imitate.” Loomis is at his best while onstage. He is energetic, infectious and you shouldn’t be surprised to find him walking into the crowd at any given moment bringing an interactive feel to his audiences.

Canadian bluesman Matt Anderson has already made quite the name for himself by winning the solo/duo competition in the International Blues Challenge in 2010, a European Blues Award for best solo artist in 2013, and numerous Maple and Juno Awards (Canada’s own Blues Music Awards and Grammy equivalents respectively). Anderson will be hitting the road on an extensive tour promoting his latest recording, Honest Man, with a full band, The Bona Fide, behind him that includes drummer Geoff Arsenault, keyboardist Chris Kirby, and Monkey Junk frontman and bassist Steve Marriner (also an International Blues Challenge winner). Anderson is always in full command of a stage with his riveting guitar work and soulful vocals.

Matt Anderson will be appearing at The White Eagle Saloon, 836 North Russell, on Thursday, May 19, for an 8:00 pm show. 21 & over only. Admission is $15.00 in advance and day of show. Tickets can be purchased online at cascadetickets.com. 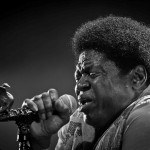 As a teenager, Charles Bradley was stirred to become a performer by James Brown. Nicknamed “The Screaming Eagle of Soul,” Bradley’s debut album, No Time For Dreaming, was released just a few years back in 2011, and his rise to stardom has been steady paced for an artist already in his fifties. He has also been the focus of the documentary Soul of America and his funky and soulful stage performances are enthralling, bringing to mind not only artists like Brown, but also the deep Southern soul flavor of Otis Redding.