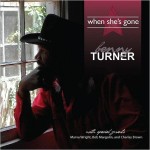 This is an exceptional album that leaves me shaking my head. Why isn’t Benny Turner more renown? After all, he is the brother of the late blues legend Freddie King. He worked with Chicago bluesman Mighty Joe Young and was also the band leader for New Orleans’ Blues Queen Marva Wright. But that is not why I question his status. When you consider that six of the ten tracks on his fourth album, When She’s Gone, were originally released back in 1997 on his album Blue And Not So Blue, which received extreme acclaim regionally, but went pretty much unnoticed around the rest of the world, it just plain leaves me stumped. This man possesses some mighty soulful vocal cords and has a delivery to a song that just oozes bluesy and soulful perfection. The remaining four tracks are covers that hit just as sure as the older material.

One must take note that the majority of the numbers on this disc do not even include guitar. Yes, Turner is a guitarist himself, but he foregoes the instrument on most selections here, preferring his own work on bass as a lead instead. But when a guitar is included, notably on two songs, he has chosen former Muddy Waters’ guitarist Bob Margolin to fill the spot. And fill it he does. Beautifully and bluesy! You might also note that filling a rhythm guitar role on the tune “Because Of You” is one Dr. John. Yes, that Dr. John who originally began his career as a guitar player before taking up the piano.

Some of the other familiar names found helping Turner out are his former employer Marva Wright as the two trade their voices on “Pity On This Lovesick Fool.” This track alone would’ve been worth the price of the disc, but there is so much more sounding just as awesome. There’s also folks like Davell Crawford, Herman Ernest III, Samuel Berfect and Jellybean Alexander on hand. And don’t miss out on the closing number “Black Night” where Turner teams up with another blues legend, Charles Brown for a six-and-a-minute reading of the classic done just right!

There are a few well-known covers included on When She’s Gone, but who cares? These songs, like Lowell Fulson’s “Reconsider Baby,” Jimmy Rogers’ “That’s Alright,” even something like Bill Withers’ “Ain’t No Sunshine” that you just can’t imagine being done any better than the original, all come across with just the right flavor and soul that’ll make you say out loud, “Ahhh yes!!!”

I guess it goes without saying, I really like this album a lot. Recommended? Big time yes!! Check it out!