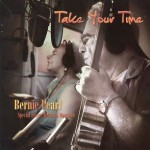 Bernie Pearl is proof that a musician does not always have to rebuild their image with changing times. One of the finest purveyors of blues guitar, whether acoustic or electric, or even lap slide, as he performs for the first time on his latest disc, Take Your Time, Pearl is always at the top of his game. The title of the album says it all. Inspired by the message delivered by legendary Mississippi bluesman Fred McDowell, Pearl took it to heart realizing that things just come out better when taking one’s time. And the results are abundant with this collection of timeless favorite songs of his that he worked out until he felt they were just right.

Selections on the fourteen track disc include works by artists such as the aforementioned McDowell, Lightnin’ Hopkins, Big Maceo Merriwether, Big Boy Crudup, Robert Johnson, Eddie Boyd, John Brim, Mercy Dee Walton, Mance Lipscomb and big Joe Williams. Quite a diverse cast of songwriters to be sure. There are also a trio of self-penned numbers that reflect the impact of the time, such as the use of Kickstarter to fund his recordings or “10:00 am Blues” an improvisational piece from their first session for the album.

Recorded in Los Angeles with a trio of long-time collaborators, Mike Barry on bass, Albert Trepgnier Jr. on percussion and Bobby “Hurricane” Spencer on sax, the disc switches from solo, duo, trio and quarter formats and all are strongly worked behind Pearl’s exceptional guitar playing. Also on the disc for a trio of numbers is vocalist Barbara Morrison, who voice adds a raw and authentic flavor to the selections.

Well known songs like “Worried Life Blues,” “Jesus Is On the Mainline,” “Sloppy Drunk,” “Traveling Riverside Blues” and “One Room Country Shack” are all presented with amazing results. These old pieces are timeless, but in Pearl’s hands they come across modern and alive. But it is the lesser known numbers that really capture Pearl’s diverse mindset in delivering first rate, catchy blues. And perhaps the most interesting of them all is his take on the obscure instrumental of McDowell’s “Mississippi Raga” (originally titled “Como” by McDowell). The presentation on this number evokes a mystical Eastern feel behind Pearl’s nicely slow played slide guitar. The lap slide is utilized on John Brim’s “Tough Times” to full effect, showing he can handle this route quite capably. The song is enhanced by the sax playing of Hurricane Spencer and Morrison’s craftily delivered vocals. Pearl returns to one of his older originals to close the album, “This Old Fool” that he has refreshed this time out by making it a band piece rather than a solo.

Bernie Pearl has been performing on the West Coast for six decades and also somehow finds time to host a radio show and work as a promoter. A perfectionist in his music and a definite master on the guitar, Bernie Pearl continues to release fine recordings. And Take Your Time stands tall amongst his career work to date. Well worth taking your own time to give it a listen. Absolutely brilliant.