You are here: Home1 / CD Review2 / Billy Branch and The Sons of The Blues 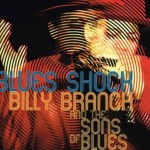 The newest disc from Billy Branch, Blues Shock, is without a doubt a crowning achievement for one of Chicago’s premier blues artists. It had been a long fifteen year wait for fresh studio material for Branch to release under his own name, filling up that time working on other musicians’ recordings. But that wait has been magnificently cured by this outstanding disc of original numbers and a handful of exciting covers that stretch Branch’s range even farther than you’d expect. His well-known traditional style of harp work has moved into territories of full blown funk, jazz and soul that truly does compliment his stellar playing.

Armed with his long-time band The Sons of the Blues, featuring drummer Moses Rutues Jr. and Nick Charles on bass who seemingly have worked with Branch since time began, with Sumito Ariyoshi on keys and newest member Dan Carelli offering smoldering guitar lines, the group has come to deliver the goods. And deliver them they have in a big way. Bill McFarland and The Chicago Horns lay down their sound to perfection on tracks like “Blues Shock” “Sons Of The Blues” and the double-entendre “Baby Let Me Butter Your Corn.” And Annie Harris from Otis Taylor’s band sends some nice mood with her violin on the heart-felt “Going To See Miss Gerri One More Time,” along with Johnny Iguana’s work on the Hammond B3.

Branch strikes right on target with his takes on Little Walter’s “Crazy Mixed Up World,” the soulful Motown number “Function At The Junction” and a blazing take of John Lee Hooker’s “Boom Boom.” Ronnie Baker Brooks joins in on the fun on “Dog House,” where he and Branch discuss the troubles they’re in with their ladies: “She don’t even call me Billy no more, she just says bow wow,” or being fed Kibbles & Bits and Purina Dog Chow for dinner.

But with no doubt the highlight of Blues Shock is Branch’s tribute to Gerri Oliver, who owned the famed long closed Palm Tavern in Chicago. The song, “Going To See Miss Gerri One More Time,” tells the story of his friend from her journey during the Great Migration to Chicago and the people who frequented her establishment during its run. Located directly across the street from The Regal Theater, it saw many of the entertainment world’s most renowned artists like Louis Armstrong and Frank Sinatra drop in after their own shows were finished. Closed by the City of Chicago in 2001, it is obvious the impact that she had on Branch.

The disc closes with yet another inspiring track, the jazzy instrumental “Song For My Mother.” Though there are no lyrics, it speaks volumes for the love he held.

Blues Shock is one of the finest moments in Billy Branch’s career. Fifteen years may have passed by between recordings, but this one will stand the test of time for far longer than that.