Seattle’s blues diva Lady A will present Bluzin The Northwest at Jimmy Mak’s on Saturday, April 4 for one show only featuring Mississippi’s Dexter Allen, the Linda Hornbuckle Band, and Lady A herself. Plan on a night of outstanding soulful blues entertainment. 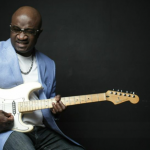 Dexter Allen may best be known for his time as the guitarist for the Bobby Rush Band, but he began performing at the age of twelve as a multi-instrumentalist working guitar, bass, drums and keyboards in gospel outfits. Though he can play a variety of instruments, often on the same song, it is his blazing work on guitar that sets him apart as well as his deep soulful vocals. And he can play it all, blues, soul, and funk, with the very best of them. With three albums in his pocket, including his latest outstanding disc Bluez Of My Soul, Dexter Allen is ready to take on the world from Mississippi and beyond.

Blues and funk diva Lady A has been singing for more than twenty years and began her solo career with the Baby Blues Funk Band in 1994. She has performed in gospel, blues funk and even Motown revues, and always brings out the Southern overtones from her Louisiana upbringing. With a pair of acclaimed recordings, Lady A has been commanding stages across the Pacific Northwest and across the country.

The backing band is also stellar, as members of The Linda Hornbuckle Band will be the power behind the show. Drummer Brian Foxworth is sure to lay down a groove and offer his vocals to the mix of the show, while Randy Monroe mans the bass, Peter Dammann and Doug Lewis handle the guitar duty, and Louis Pain plays the Hammond B3. This band alone is worth the admission price.

Jimmy Mak’s is located at 221 NW 10th, showtime is 8:00 pm. Advanced tickets can be purchased at TicketTomato.com, $15.00 reserved and $12.00 general admission. This is a Cascade Blues Association co-sponsored event and members can receive a 10% discount by using the code “CBA” when ordering online before March 31.