Rite On! Rite Now!
Self Produced 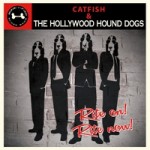 For anyone looking for an album that will get your pulse racing, look no further than Catfish & the Hollywood Hound Dogs’ Rite On! Rite Now! This is great grind-it-out West Coast blues with more than a hint of rockabilly, reminiscent of bands like Hollywood Fats or Rod Piazza & The Mighty Flyers — crunching harmonica riffs enmeshed with a swinging guitar that bring you right into the mix with the opening salvos of “Hound Dog Boogie.”

Front man, harmonica player, and vocalist Gilbert “Catfish“ Mares penned all but two of the numbers on this album, and you can tell that he has studied his West Coast blues history. Jumping and pounding just the way you like it, Catfish is joined by the slashing guitar stylings of Anthony Contreras, the “done-right” bass of Mark St. John-Jones, and the powerful drumming of Evan Caleb Yearsley. And since Thomas Yearsley of The Paladins engineered and mixed  Rite On! Rite Now! you know that there is going to be a steady pace of quick grooves throughout.

The two covers are both songs much covered by Hollywood Fats back in the day, “Rock This House” and “Too Many Drivers.” Both feature the stylings of guest Mike Malone, and Nathan James also takes part in the former.

You got to love this one. It’s full of attitude that’s going to make the speakers on your player smoke! Just try to sit still while listening to Rite On! Rite Now! I really don’t think it’s possible, and Catfish is destined to be the next name to watch when it comes to harmonica playing dynamos.

Cherie’s Blues Highway Presents Ladies Of The Blues Of The NW I’ll Take You There: Mavis Staples, the Staple Singers, and the March...
Scroll to top