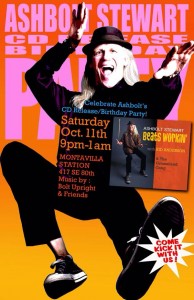 Ashbolt Stewart has been hittin’ those drums for the past 50 years and he is now set to release his very first recording under his own name. Titled Beats Workin’, Ashbolt spent three days last spring down in San Jose, laying down tracks at Kid Andersen’s Greaseland Studios, with a collection of some of the finest blues musicians in the Bay Area. Andersen, besides engineering and overseeing the project also leant his work on guitar, organ and piano. The album includes 17 numbers, with six written by Ashbolt, one from his wife Susie MacDonald and one from Buzz Holland.

To celebrate the release of Beats Workin’, there will be a CD release party at Montavilla Station, 417 SE 80th, on Saturday, October 11th, at 9:00 pm. And you know that their will be plenty of friends on hand to help in the celebration. But if that was not enough, it is also Ashbolt’s 65th birthday. So head on over to Montavilla Station, pick up a copy of the new CD and make it one of the most memorable birthdays for Ashbolt Stewart ever!