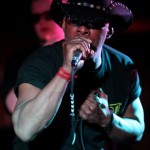 I’m sure some of you have noticed that cowboy drummer hanging around the local blues scene. That would be Chuk Barber. Chuk is a busy man, but he stopped long enough to answer a few questions so we could learn more about him.

Q: Where were you born and raised? How long have you lived in the Portland area?

A: New York City…The Bronx, specifically. By the time I graduated from high school, we had moved out to Westbury on Long Island. I’ve been living in Portland for 10 years. I came here from New Orleans—right after Hurricane Katrina.

Q: How long have you been performing professionally?

A: I started playing the drums at age 11. Louie Bellson was my first drum teacher. He gave me my first three lessons as a favor for my dad. Then he and Pearl Bailey went on a European tour and he sent over his friend, Hal Blaine. He was my drum teacher for the next year. Then Jimi Hendrix came on the scene and my preoccupation with jazz went straight out the window. I was officially “A Rocker!” We started playing at high school events. I played a club when I was 14 for ten whole dollars! There was no stopping me after that.

Q: Did you always want to perform professionally, or if not, what did you “want to be when you grew up”?

A: I never gave it much thought then. I was too busy caught up in playing music because “Chicks thought you were cool!” Ha, ha, ha! I really wanted to be a cowboy and got the chance several years later when I went to college in New Mexico. I went on a cattle drive on King Ranch up towards Raton, NM. I rode, roped, dipped, and clipped. I was 18.

Q: Do you have a day job—what is it and how long have you been doing that—or do you not want to mention this?

A: For eight of the ten years I’ve been in Portland, I’ve taught Afro-Brazilian, Afro-Caribbean Drum and Dance to middle school children at G.R.E.S. Crianҫas de Zumbi Samba School. Before that, I taught in New Orleans at New Orleans Charter Middle School.

Q: Who has influenced your music?

A: Everyone—from Miles to Stevie Wonder, the Doobie Bros. to the Allman Bros, Basia to Gilberto Gil, Ruben Blades to Sting. Personally, I’ve had some very good friends, mentors, and teachers through the years—my brother-in-law, Curtis Pierre; my best friend and brilliant percussionist, Kenyatta Simon, who use to play with the Crusaders and Dr. John; Moses Wheelock, Marvin Gaye’s old percussionist, who was the percussionist in War before me; Bill Summers (Herbie Hancock & the Headhunters) who stayed with me, Curtis and my sister, Carolyn, when he first moved to New Orleans from LA; Airto (Return to Forever); Don Elias(Joni Mitchell); Jai Johnny Jamison (Allman Bros.)’ Bear Bryant (Tower of Power); Bobby LaKind (Doobie Bros.); Mongo; Tito; Patato…I could go on and on.

Q: How would you describe your music?

Q: What instruments do you play?

A: All drums and percussion instruments, except for Tabla (that shit is hard! Like a thousand different patterns.) If it has a “skin” on it, I can play it. I don’t know if you can call it playing but I can find notes on the piano…Ha, ha, ha!

Q: Did you have any formal training or are you self­-taught?

A: For the most part, except for the very beginning, when I had lessons from two of the greatest drummers in history.

Q: What awards have you won?

A: In 2007, I got together with some local musicians—Al Criado, Brian Ward, Cedric Wright, Tom Sandahl, La Rhonda Steele, and Michael Bard—in a band we called Indigo, and made a CD called Moist. Curtis Salgado even plays harmonica on the track “Spill the Wine”(WAR). I’ve played percussion on a lot of other people’s albums. Two just last month.

Q: Any more CD’s in the works.

A: Lowrider Band is coming out with a new CD sometime in 2016. It will be the original members of WAR’s first CD in about 30 years.

Q: Who have you played with?

Q: Your bandmembers—what instruments do they play, how long have they been with you, etc.? Are there any former band members you want to mention?

A: I just got off the road with The Lowrider Band, formerly known as WAR, which has four of the original members still playing their original instruments—Howard Scott, guitar and vocals, writer/composer of 80% of WAR’s iconic hits—“Spill the Wine,” “LowRider,” “Cisco Kid,” “Why Can’t We Be Friends,” “Slipping into Darkness,” “The World is a Ghetto,” “All Day Music,” “City Country City,” etc.) I can’t put into words how much I love this man; Harold Brown, drums and vocals; B.B. Dickerson, bass and vocals; and Lee Oskar on harmonica. Rounding out the lineup is Lance Ellis, saxophones, flute and vocals, and Pete Cole on keyboards and vocals. I, of course, play percussion and sing. I have been with them 19 years, which is the same amount of time Papa Dee Allen, the original percussionist who died in 1988, was with them.

I want to give a shout out to all my boys in my former groups—AfroSkull, Jonas Risin’ and Sumo. Also to my newly “bestest” bandmates, the California Honeydrops!

I also am an author and a playwright. My latest novel is called Endangered Species about the last African on planet earth, and my play is entitled Dear Xango, which follows the life of a 15-year-old African girl named N’belle as she journeys from the motherland to the Caribbean and southern United States as a captive slave. Both are available for sale. Contact me at drchuk60@gmail.com.