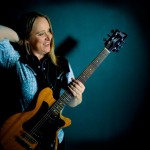 Australian blues artist and former Portland resident Fiona Boyes returns for a couple weeks to her second home for a long awaited visit that will include multiple shows and various band lineups. A five-time Blues Music Award nominee (including being up for the Koko Taylor Award for traditional female artist this year), the 2003 International Blues Challenge solo/duo winner and on the heels of a new recording, Box & Dice that is receiving rave reviews from around the world, she is surely going to be welcomed back with big crowds every night. Touted as a master at both acoustic and electric guitars, she is often compared with the talents of Memphis Minnie, and deservedly so.

Fiona Boyes first Portland area performance during her visit will take place on Friday, February 5 at Vie de Boheme (1530 SE 7th Ave.) for a 9:00 pm show with a band that will include Dave Kahl on bass, Lloyd Jones on guitar and Carlton Jackson on drums. Admission is $10.00. On Wednesday 10, Fiona will be the guest artist with Soul Cookin’ at Blackwell’s.  On Sunday 14, she will be joined by Jimi Bott on drums, Mitch Kashmar on harmonica and Dave Kahl on bass at Billy Blues (7115 NE Hazel Dell Ave., Vancouver, WA) from 7:00 – 10:00 pm. Then on Wednesday 17, Fiona will return to Blackwell’s where she will be filling in for Lloyd Jones to lead Soul Cookin’ for the night.

That’s four great chances to catch up with Fiona Boyes during her visit, but keep your eyes and ears open as there may be more yet to come!