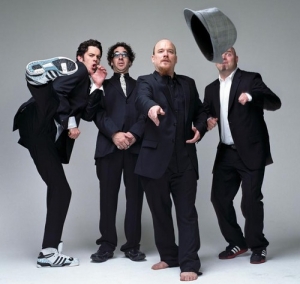 G Love & Special Sauce return to Portland in celebration of their newly released album, Love Saves The Day, with a performance at The Hawthorne Theatre & Lounge on Thursday, March 23. Love calls the new album, “the fullest realization of the hip-hop blues” that he first pioneered with Special Sauce in the early ’90s. Filled with their down and dirty “trashcan blues” sound, G. Love making his guitar snarl and his harmonica moan, bassist Prescott bringing nimble funk to the bottom end and Clemens’ drum work crackling with power. “The music,” G. Love enthuses, “jumped off the tape.”

Love views today’s music world as the Wild West, with “all the lines washed away;” however, his genre-blurring music now is more relevant than when he started. “It’s a good time to be doing what we are doing,” he asserts, noting Gary Clark Jr., Jack White, Robert Randolph and Galactic as some fellow keepers of the blues flame who “maintain the roots but push music forward.”

Laith Al-Saadi – Star From “The Voice” In Portland