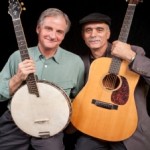 There has never been another group like Jim Kweskin and the Jug Band. The original “Americana” band, playing everything from classic blues to hillbilly country, ragtime, jazz, and rock ‘n’ roll, they perfectly captured the legendary 1960s mix of exuberant anarchy and heartfelt sincerity. “The rock historian Ed Ward went so far as to place the Kweskin Band alongside the Beatles, the Rolling Stones and the Byrds as that period’s most influential groups.” – Alex Ward, The New York Times

Two of the legendary bands key musicians will be teaming up for a special show at The Alberta Rose Theatre on Thursday, September 11th, Jim Kweskin and Geoff Muldaur.

Jim Kweskin is probably best known as a singer and bandleader, but he also created one of the bedrock guitar styles of the folk revival, adapting the ragtime-blues fingerpicking of artists like Blind Boy Fuller to the more complex chords of pop and jazz. He has maintained a remarkably consistent musical vision since his jug band days, continuing to explore traditional folk and blues with the sophisticated sensibility of a jazz musician and jazz with the communal simplicity of a folk artist.

Geoff Muldaur was already a known factor when he joined the jug band, and he went on to lend his soulful vocals and brilliant arranging skills to a wide range of influential groups, from Geoff and Maria to Paul Butterfield’s Better Days to his own dazzlingly varied solo ventures. Fifty years on, his singing remains uniquely powerful; as the English folk-rocker Richard Thompson said: “There are only three white blues singers, and Geoff Muldaur is at least two of them.”

Showtime is 7:30 pm. Minors are okay when accompanied by a parent or guardian. Tickets are $22.50 advance and can be purchased at www.albertarosetheatre.com, $25.00 at the door.