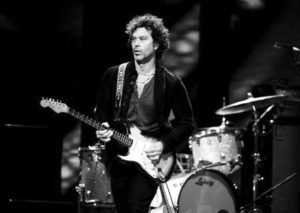 Doyle Bramhall II is one of the most distinctive vocalists, guitarists, composers, and producers in contemporary music. Indeed, none other than Eric Clapton, with whom Bramhall has worked with for more than a decade, lauds him as one of the most gifted guitarists he has ever encountered. As the son of the late Texas music legend Doyle Bramhall, he was raised in a home filled with the blues and rock ‘n’ roll styles indigenous to Texas.  The younger Bramhall – a rare and distinctive guitarist who plays left-handed, but with his instrument strung for a right-hander and flipped backwards – was befriended and supported early in his career by Stevie Ray Vaughan, recruited by Jimmie Vaughan to play in The Fabulous Thunderbirds, and formed The Arc Angels with Charlie Sexton, Chris Layton, and Tommy Shannon. His guitar mastery even led to his being showcased on a few tours with both Eric Clapton and Pink Floyd’s Roger Waters.

His latest released, Rich Man, finds Bramhall exploring an intensive spiritual and musical journey that includes instrumentation he discovered through trips to Northern Africa and India. Rich Man is a watershed achievement for Bramhall, both in terms of the many music styles in the tracks-which begin and end with his fundamental American blues influences and in between follow his global music explorations and arrangements-and the inner examinations resulting in the spiritual growth expressed in the lyrics.

“I read a quote from Charles Mingus,” Bramhall explained upon the completion of Rich Man. “He felt like he was not playing his music as much as creating the sound of his life and experiences through the medium of his music. I looked at his life and related to that, and tried to capture the same thing on the album.”

Doyle Bramhall II will be returning to Portland for a performance on Sunday, April 9 at The Mission Theater, 1624 NW Glisan Street. Tickets for this 8:00 pm, 21 and over show can be purchased through Cascadetickets.com for $20.00 in advance or $22.00 day of show at the door.