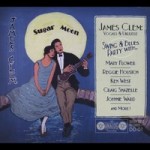 James Clem, highly regarded for his guitar work and love for traditional, Piedmont and Delta style acoustic blues takes on another of his passions in his latest recording, playing the ukulele. Over the years he has performed both locally and internationally at ukulele festivals and showcases, so it should be no surprise that he has put together a collection of old time favorites, including standards, westerns, and blues, mostly from the 1920s and 30s, and these numbers really swing. They’re fresh and delightful, and you may recognize a number of the tracks instantly, but there are also new takes on other numbers where the ukulele would be the last instrument that you’d guess could take them on.

The album, Sugar Moon, was recorded live in the studio direct to analog tape at Nettleingham Audio in Vancouver, WA with all the musicians playing alongside one another. Ron Rogers engineered and mixed the album and also provided his own guitar work, back-up vocals on a few numbers, and even shared a little kazoo with Clem on the Jesse Fuller classic “San Francisco Bay Blues.” Kevin Nettleingham completed the mastering.

The musicians involved with the project are all sensational. The core band included Ken West offering rhythm guitar and mandolin, while Craig Snazelle worked out the stand-up bass. Guests artists found Don Campbell on bass for “Truckin’ My Blues Away,” Darka Dusty playing accordion on “Fat Cat,” and both Johnnie Ward and Reggie Houston on saxophone. Perhaps my favorite selection on the album is “Swing, Brother, Swing” where Mary Flower joins Clem on alternating vocals and who also showcases her delightful guitar work alongside his ukulele.

Other fun pieces are nice readings of “Chinatown, My Chinatown,” “Caught Us Doin’ It,” “That’s My Weakness Now,” Bob Wills & Cindy Walker’s “Sugar Moon,” and Merle Travis’ “Fat Gal.” But as a whole, this is a splendid recording to hear and will surely find you smiling and singing along. Don’t be fooled that the ukulele is a lesser instrument, like anything else in the right hands it can sound like a million bucks. And in James Clem’s hands that is exactly how it comes across. Fun, fun, fun, Sugar Moon is a welcome refreshing breath of air.

My Window Faces The South / Swing, Brother, Swing / I’m Gonna Sit Right Down And Write Myself A Letter / Fat Gal / Low Down Dog / On The Sunny Side Of The Street / Sugar Moon / Chinatown, My Chinatown / Cow Cow Boogie / San Francisco Bay Blues / Exactly Like You / Caught Us Doin’ It / I’m An Old Cowhand / That’s My Weakness Now / Truckin’ My Blues Away

Journey To Memphis To Be Held Two Nights At The Lehrer : June 5th & 6t... Igor Prado Band and Delta Groove All Stars
Scroll to top