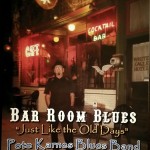 Bar Room Blues: Just Like The Old Days
Self Produced

For all of the long-time Portland blues lovers who remember the days of The White Eagle when it was one of the premier venues in the city, this is certainly going to be something that will bring back a lot of fond memories. Pete Karnes Blues Band was a house band at The White Eagle, filling the place with eager fans wanting to hear great tunes and to quench their thirst for adult beverages. After a lengthy departure from the city, Pete Karnes made a rare trip back to the club in September of 2014, bringing with him members of his current Florida-based band and reuniting with several of the key players from his original Portland band, and they mix well together. This DVD video release, Bar Room Blues: Just Like The Old Days, is the companion piece to the previous released CD under the same name. Most of the same tracks are available here, filmed by David Jack Jester using multiple cameras throughout the room. But what makes this indispensable for any fan of the Pete Karnes Blues Band is the interviews inserted through the disc with Karnes and band members recalling the times they experienced on the stage, the road, and the well-renowned artists that they worked with or brought into the city to showcase. He even offers examples of the harmonica style many of his old friends used.

Original band members Michael Mendenhall, Doug Smith, Richard Englund, and Johnny Moore are all on hand, telling their tales and performing. The set-list is standard blues classics popular from the era and still nowadays, plus a couple Karnes originals “How Did We Let It Go This Far” and his tribute to his late wife “Rayma’s Song.”

Owning both the CD and DVD is worth the extra expense. Not only with the visual quality and enjoyment of seeing the band onstage at The White Eagle, but as mentioned there are tracks only available on one format or the other, such as the inclusion on the DVD of a Jimmy Reed Medley and John Lee Hooker’s “Big Leg Boogie.” And speaking of Hooker, Karnes not only performed with him but also recorded with the late master. His style of boogie playing is a heavy influence on Karnes’ music as is all traditional classic blues, which you will never hear this band stray from.

Whether you were there for the old times or came out for this show, it is a great souvenir of blues memories recalling the greatness of Portland’s early club scene days and the people who ruled the stages at the time.

Anthony Geraci And The Boston Blues All-Stars
Scroll to top