In 1964, my grandmother brought out an old phonograph, selected a record from her collection of 78s and handed it to me. I removed the record from its 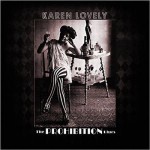 paper sleeve and holding it only by the edges, carefully placed it on the velvet turntable. I cranked the handle on the side of the machine until the record started spinning then gently lowered the heavy needle onto the outside rim of the shellac disc. Scratchy music sounded from the external horn and my Nana said “Let’s foxtrot!”  This was the beginning of my lifelong love affair with Prohibition era music.

Prohibition was a nationwide Constitutional ban on the sale, production, importation, and transportation of alcoholic beverages in effect from 1920 to 1933. In ways completely unintended by proponents of the 18th Amendment, Prohibition forever changed our cultural, societal and musical landscapes.

That change may have begun with the “Speakeasy” – a place where people from many different backgrounds, races, genders, sexual orientation, and socioeconomic statuses could drink and socialize together. Gangsters rubbed elbows with highbrows, men and women could smoke, drink (get splifficated) and dance to the new hot jazz and blues. From Delta fields and Storyville bordellos via the back rooms of countless speakeasies to the big city cabarets and night clubs, blues and jazz became the music that defined the Prohibition era.

Instrumental in popularizing the genre were the classic female blues singers of the 1920s and 30s – singers like Ma Rainey, Bessie Smith, Ethel Waters, Alberta Hunter, Lucille Hegamin, Ida Cox, Victoria Spivey and Sippie Wallace.  Female blues artists traveled up and down the east coast riding the rails and performing at the 100+ venues of the T.O.B.A. circuit (TOBA/Theater Owners Booking Association or as Ma Rainey liked to call it “Tough On Black Asses”).

In the 1920s black artists were recorded for the first time in history and black music was embraced by both black and white audiences.

Mamie Smith recorded “Crazy Blues” on August 10th, 1920.  The record sold over 75,000 copies in its first month – a staggering amount at the time considering the price of both the record and the phonograph machine needed to play it.

Bessie Smith saved Columbia Records from bankruptcy with sales from her records.  “There’s two kinds of people in this town, bootleggers and customers.” While “Empress of the Blues,” Bessie Smith was blazing musical trails across the north, south and midwest, in Rose City “Prohibition Rose” reigned Queen over bootlegging activities in Stumptown.  Shanghai City was infamous during prohibition times for its wild night life, underground city, and smuggling: booze, dope, gold and sometimes people. During Prohibition being “wet” in Portland had nothing to do with the rain.

I don’t know how many Portlanders listened to blues and jazz in the 1920s – probably not many given the popularity of the Ku Klux Klan in the early part of the decade.  But today in Portland, we have one of the biggest blues communities in the country and I’m honored to be part of it.

There’s a tattoo on my right arm of Ma Rainey, Bessie Smith, Billie Holiday – some of my favorite Prohibition era blues artists. My grandmother’s favorite song was “Pennies from Heaven” recorded by Billie Holiday, and my sisters and I sang it to her as she died. If there is a heaven, I hope my grandmother is there dancing the Charleston, listening to Billie, singing with Alberta and joking with Ma Rainey (they had a lot in common).

Karen Lovely is a CBA member and 2009 “Journey to Memphis” Winner. She was the 2nd Place Band Winner at the 2010 International Blues Challenge representing the Cascade Blues Association.  She has won 7 Muddy Awards including “Performance of the Year” and “Best Female Vocalist”.  Her sophomore release “Still the Rain” was nominated for (3) Blues Music Awards including “Best Contemporary Album”, “Best Contemporary Blues Female Artist” and “Best Song”.  She has just released a new album of Prohibition era blues called “PROHIBITION” and will be performing songs from the new release with her Prohibition Orchestra at the Safeway Waterfront Blues Festival on July 4th. For more information visit her website at www.karenlovely.com