I want to reflect on a little more personal take this month as my trip to Memphis for the International Blues Challenge was a true life event that I will never forget. A couple years back I was approached by my very close friend Jenn Ocken about assisting her in putting together a book about the International Blues Challenge featuring her photography. I told her to count me in. The original idea was to have me write the lead in pieces for the various chapters of the book (i.e. explaining what the event was, the background of The Blues Foundation and the growth that it has seen over the past decade or so). This was to be accompanied by a series of quotes to go along with her photos that I would obtain from people who had performed, attended or volunteered during the nearly week-long event over the years. But those quick quotes began taking on a life of their own, with full-blown accounts from many people relating their experiences and what the event has done or meant for each of them. 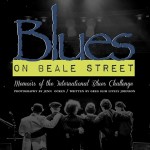 After two years of gathering and compiling everything that went into the book, we were able to have it published and released during this last IBC in January. And when we were able to physically hold the book in our hands for the first time, it was quite an emotional scene. We did it! We had released our first book together titled Blues On Beale Street, Memoirs Of The International Blues Challenge.

Response to the book was sensational, moving a great number of copies from the table we set up in Club 152 and by Jenn and her fabulous team of Jordan Hefler and Jessica Losee selling the book club to club during the night. Jenn appeared on local radio station KWAM and both of us sat in with Vinny Marini’s Music on the Couch internet radio show.

Without doubt the highlight of our week took place Thursday, January 22, as we held a special VIP book signing and release party at The Silly Goose Lounge, about a block off Beale Street from BB King’s and Blues City Cafe. We did not know exactly what kind of turn-out we would receive, but it exceeded anything we could have dreamed of as many friends, family and musicians showed up to give us their congratulations and support. Jenn had hired Jonn Del Toro Richardson and Sean Carney to perform, but it ended up being so much more, as friends Teeny Tucker, Lionel Young, Karen Lovely, Brandon Santini, Hawkeye Herman, Micah Kesselring and Michael Frank all sat in with Jonn and Sean. And there were so many other musicians who came out to share the day with us, too, including Ben Rice, Lucy Hammond, Paula Harris, Randy Oxford and Michele Seidman amongst them. From all of the photos taken during the party, it was quite obvious just how proud and grateful that Jenn and I were for all of the positive feedback and showing of love for the project and ourselves. There was an abundance of smiles and tears from the both of us.

As part of our pre-sales push, Jenn had created a program called “Buy a Book, Give a Book.” This was aimed at 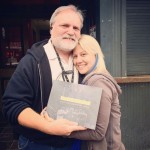 having donations obtained so we could place a copy of the book into the hands of every young musician who was participating in this year’s Youth Showcase during the IBC. Almost all the funds to date have been covered by donations and we gave books to 103 blues kids that week.

Our next step now is to push Blues On Beale Street, Memoirs Of The International Blues Challenge onto a national level. Sending out press releases and continuing with radio interviews to keep the book fresh in peoples’ minds. We’re working on having Jenn come out to the Waterfront Blues Festival this summer, so people in Portland will have a chance to meet both of us and are able to pick up a copy of the book we can each personally sign for you. In the meantime, I will have copies available as each shipment lasts that I am having Jenn send directly to me from Baton Rouge as needed. These have all been signed by Jenn and I will personally inscribe them for you as well. Let me know if you would like to pick up a copy.

You can also order the book directly from Jenn at documentingBlues.com/store/ and we are now available on Amazon.com. Just look up the title, Blues On Beale Street, Memoirs Of The International Blues Challenge. We hope that you seek out the book. We’re quite proud of it and we believe that you will enjoy Jenn’s extraordinary photos and the stories that go along telling what goes on behind the scenes, onstage and everywhere else at the IBC. Because you know, everybody who goes to Memphis for the IBC will come home with their own stories to tell.