Do What You Want
Barrbarian Records 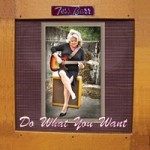 Here is proof that not all blues happening in the State of Oregon comes from along the I-5 corridor. For the past thirty years Tess Barr has been mixing things up out in the Columbia River Gorge, blending her early exposures to country & western and her love of rock in her teens into her own blues format that has made her a favorite act in the clubs around Hood River and The Dalles. Tess has recently released a new CD titled Do What You Want that should make those fans very happy and win over even more.

Do What You Want is a culmination of many years worth of work. It is almost entirely original material, with the lone exception being Junior Wells’ “Little By Little.” All are written by Tess Barr and her husband Patrik.

Opening with “I’m Gonna Die,” the song flows with a standard blues progression that is highlighted by some nice slide as Tess explains that she’s “going to die loving you, she doesn’t know why, but you’re killing her.” This is followed up by “Dead And Gone” with some very haunting slide work from Patrik for a heartening number about a past love, married too young and the relationship was rocky and didn’t last. But still despite the hurt, those memories return 29 years later once you learn that person has died. Tess’ vocals on this track are quite emotional setting the song’s mood up perfectly. On the title track “Do What You Want” I hear a little surf and 60s era garage band guitar playing, pushing the song along, once again with Tess singing about a relationship that’s incompatible, “just do what you want, you never think twice, just go out and play, let’s hope that you don’t regret it one day.” “Crimes And Sins” with its Gram Parsons’ acoustic guitar backed by pedal steel courtesy of Jeff Hulett and steady drumming from Jeff Minnick, tells the story of a young woman born to a teenaged mother and raised by her grandparents, told she was on her own at the age of thirteen. Spending her life feeling that she was to blame for the sins of her parents only to learn what a true family is from her husband and children.

There are a handful of songs on Do What You Want that have been in Tess’ repertoire for some time. “Blues For The Avatar” is the title track to a 1996 comedy film that Tess and Patrik also starred in that was showcased at a trio of film festivals, even taking home the Silver Remi Prize at Houston’s World Fest. Another tune that has been held onto for a number of years is “Christmas Song,” originally written in 1985 that has been a holiday favorite locally for her.

Do What You Want is a very fine release that reflects Tess Barr’s diverse musical background and how it has come out through her in her blues. This is music that comes from experience and the heart. An exceptional vocalist with a band that knows exactly how to bring this original music to the forefront. So if you ever find yourself out in the Columbia Gorge area, or you see her name pop up in one of Portland’s venues, do yourself a favor and check out Tess Barr and her band. The music happens beyond the Northwest cities like Portland, Seattle, Eugene, Tacoma or Spokane and Tess Barr is living proof of that.