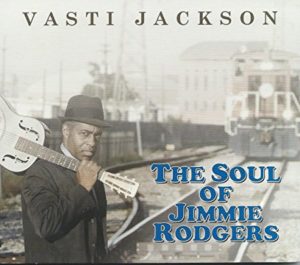 Recently, this year’s Grammy nominees were announced and among them was the latest release by Vasti Jackson, The Soul of Jimmie Rodgers, in the traditional category. Now, this may seem a little odd when you consider the album is a tribute to Jimmie Rodgers, who has been called the original country performer, but you need to look back in time. Music was music in those early years and a lot of the songs being sung crossed ethnicity. It was only when companies began selling music that it was sorted into categories like “Hillbilly” or “Race” records for marketing purposes.

Jimmie Rodgers’ music spanned genres. He was called a variety of nicknames including “The Singing Brakeman,” “The Singing Hobo,” or “Blues Yodeler.” He was extremely popular and he had a series of hit songs that became staples of American music.

Vasti Jackson was enchanted by train songs as a young man which he has retained throughout his life. So naturally Rodgers’ music appealed to him when he heard it again recently in a tribute program. It brought back memories and he decided to pay his own tribute to the music with The Soul Of Jimmie Rodgers. But he has brought it to a more modern standard. Yes, he still performs the music as a solo artist with just his guitar as the troubadours or itinerant musicians of those earlier times would have done. The music just sounds more crisp and clear in his hands and that is more a reflection of how recordings have been improved in the past century.

The song selections will be familiar as they have stood the test of time. They also show the diversity of Rodgers’ songwriting talents to appease to listeners of the period. Jackson does not take on the yodel that Rodgers was known for and he also mixes in two of his own original compositions that easily fit in the Jimmie Rodgers mold (“Lowdown Hoedown” and “Train Rollin’ Blues”). Included are classics like “Waiting On A Train,” “Miss The Mississippi And You,” “The Women Make A Fool Out Of Me,” “In The Jailhouse Now,” and “Those Gambler’s Blues” (the last is in actuality Rodgers’ take on the traditional “St. James Infirmary”).

Vasti Jackson is an extraordinary musician and songwriter in his own right and has received a number of high accolades throughout his career as one of Mississippi’s finest Delta bluesmen. The Soul Of Jimmie Rodgers is a heartfelt tribute to an American icon. It doesn’t matter what you might decide to label it: blues, country, Hillbilly, roots, Americana or anything else. In the long run it is simply good music that continues to hold its place in our national traditional songbook.