Every month we have a terrific line-up of talented local artists perform for you at the monthly general membership meetings. This city has a vast wealth of outstanding artists who call Portland home and we’re exceptionally proud of the acts we have showcasing for you this month as they display some of the younger musicians that are making great strides in making our local blues community even stronger.

Opening the night we will have the duet of Melody Guy and Jake Blair. Guy is a singer-songwriter who has been touring the country as a national act that has been based out of Nashville. Several years ago she met Jake Blair, one of the area’s top young blues-rock guitar slingers, and the two of them hit it off quite well on stage. On a tour Guy was making this past year, the two met up again and they more than just lit things up on stage. The pair married this past February and have been performing together as often as possible. 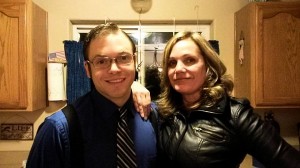 Melody Guy is a native Oregonian, with nine albums already to her credit, including her most recent Diamond On The Street. Her music covers a wide range of genres, all done exceptionally well, with several national musicians covering her work.

Jake Blair first struck the local attention more than a decade back as one of the young blood guitarists pursuing blues in a generation that also included Ty Curtis and Ben Rice. He won a Muddy Award for best new act in 2001 and has progressed as an exceptional singer-songwriter with a new album on the horizon and rearing to make his own mark on the national circuit.

Certain to be a memorable performance, let’s help kick off their marriage and working together with a rousing appreciation. We already know that they’re both over the top musicians, so don’t miss out seeing them at the meeting. 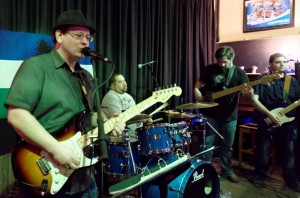 For the second set, we will also be making up for the February meeting that was snowed out and bringing back a group that performed at last summer’s picnic. But with an altered line-up from what we saw then. August In Blue has been a long-time dream of guitarists Richard Staats and Josh Makosky, who have been making music together since they were in the 8th grade. In the summer of 2012 the two joined forces to blend the upbeat precision of rock and funk with the soul and emotion of the blues. Thus the birth of August In Blue. A band formulated and assembled on the month of the Blue Moon. Both have performed with bands on their own, Richard with Stupefyin’ Jones and Josh with Angel Bouchet, The Space Monkeys and was prominently featured in the Shari’s 3 AM recordings. With the fiery, funky thump that you come to expect from Calen Uhlig, plus the soul and groove of the amazing Brian Foxworth, the combination becomes explosive. Having this rhythm section alongside this pair of hot guitar players just means that the members are certainly in for a big treat at the meeting. And for the meeting, throw in the extraordinary vocals of Naomi Tee as a special guest and the set is going to be cookin’ with grease for a good time for sure!!

Come out and share another night of fun and music at the CBA monthly meeting. Always guaranteed to be a great time with good friends.