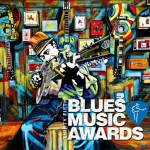 On May 8, 2014, The Blues Foundation held the 35th annual Blues Music Awards in the Cook Convention Center in Memphis, TN. Always the premier night in the blues world, this seven-plus hour awards ceremony and concert brought together a grand selection of many of the best artists working today in performance and celebration. Many of the sets featuring musicians who rarely, if ever, play with one another on stage at any other time.

For the past several years, The Blues Foundation has been filming and recording the Blues Music Awards and releasing some of the banner performances on a DVD, and the past couple of year have also included a companion CD of the songs uninterrupted as the video is meant to be shared on Public Television. Additional material is also included as bonuses not programmed as part of the show aimed at television, but just as exciting. The production team does a masterful job every year and the finalized project was handled at Memphis’ famed Ardent Studios.

This year’s collection includes appearances by people like James Cotton, Ronnie Earl, Elvin Bishop, Rory Block, Beth Hart, Charlie Musselwhite, Anson Funderburgh, Brandon Santini, Cedric Burnside, Doug MacLeod, Mike Zito, Little G Weevil, Lurrie Bell, Trudy Lynn, Kim Wilson, Teeny Tucker and many, many more. For those who cannot make the Blues Music Awards, or for those who are curious about what goes on at these gala events, this is the perfect place to catch what you may be missing. For those who have attended, you know that these are must-have for your collection of memories.

Bonus Tracks on DVD: Memphis Boogie / Declare / Help Me With The Blues / Recession Blues / Ain’t Going Down The Dirty Road / Hula Hoop / Down In Memphis

David Jacobs-Strain To Record Live Performance At The Alberta Rose Theatre-... Applications Now Being Accepted For 2015 Journey To Memphis
Scroll to top