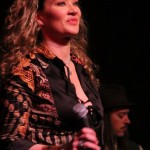 Raised in Belgrade, Yugoslavia, guitarist and vocalist Ana Popovic now lives in Memphis and over the years has proven herself at venues and festivals around the world to be an electrifying live performer. Her shows are a blend of smoking electric funk and slide guitar, jazzy instrumental and tight blues grooves combined with soulful vocals. She has headlined a number of festivals and was the only female guitarist included on the 2014 Experience Hendrix tour. Ana has also performed alongside renowned musicians such as BB King, Joe Bonamassa, Susan Tedeschi, and Buddy Guy. Popovic has been nominated five times for Blues Music Awards, including twice as the Contemporary Female Artist of the Year and has released eight albums over her career, including her latest Blue Room.

Popovic does not make it to the Oregon area very often, so her upcoming performance at The Star Theatre, 13 NW Sixth Ave, on August 1 is a show you should not miss.  Showtime is 9:00 pm and tickets may be purchased in advance through TicketFly.com for $18.00. This is a 21 and over only show.