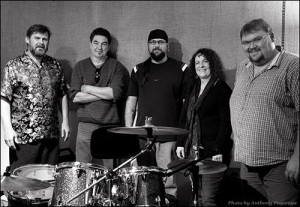 For more than thirty years, Barbara Healy has been astounding audiences throughout the Pacific Northwest. Based out of the Eugene/Albany area she has been delivering top quality blues and R&B at major festivals and venues all up and down the West Coast. Recently she put together a new band focusing on her incredible songwriting and they have recorded an album titled Shades of Blues. The band on the disc is made up of Barbara’s essential vocals, guitarist Mickey Beach, Keyboardist Michael Mendenhall, Corey Culberhous on bass, Phil Shupert on drums and horn players Jeff Homan and Joe McCarthy.

Barbara Healy & Her Groove Too Band will be holding a CD release party at Duff’s Garage (1635 SE 7th) on Saturday, September 7th at 9:00 pm. Songs from the new disc, old favorites and even some brand new tunes never recorded will be featured. Guest players will include Jason Montgomery on trumpet, Tony Johnson on sax and “Heart Attack” Joe McCarthy will show up later in the night. Admission is $10.00 and CBA members can receive a $1.00 discount for this co-sponsored event by showing their membership card at the door.

What’s on Tap for the October General Membership Meeting . . .