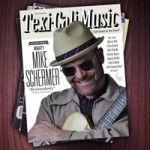 Mighty Mike Schermer has been a mainstay amongst the elite musicians of the Bay Area for the past two decades, building a name for himself as one of the top guitarists around if you require somebody with the right knack to fill all your needs. He’s been doing so for some of the best over that time, including Elvin Bishop, Bonnie Raitt, Howard Tate and Charlie Musselwhite to drop just a few names. He has also put out five recordings under his own name, with his latest, Be Somebody, standing high above them all and perhaps may be amongst the very best of the year overall. It has that catch to it that is hard to step away from. It keeps drawing you back for replays over and over again, without getting tired at all.

Why is that? Well first off, Mike Schermer is one hell of a songwriter. He creates lyrics that stay in your head. They’re not wordy, just clever and simple. Like “old gum stuck on the bottom of your shoe,” they keep “Stickin’ To You.” There is a common theme that runs through several of the numbers here, the chance to make something of yourself. Thus the title track of the disc, “Be Somebody.” What does a guy have to do to be recognized? Does he have to be scandalous to be noticed. The record producers like him, but tell him he’ll probably be really big when he’s dead. Now that really is the blues, all sung in this song in a style reminiscent of Delbert McClinton and features background vocals by Angela Strehli and piano from Marcia Ball. The theme continues with tunes like “Someday” when he will have it all and also “Keep Reachin’ For The Top” where you’ll get there if you work hard enough. Of course there is the down-side as well, where “My Baby Only Loves Me When She’s Drunk” talks about a bad relationship when his girl is sober for a humorous offering to the disc.

Be Somebody was recorded in both Austin, Texas and the Bay Area. It’s good to have friends that you’ve worked with over the years because they’ll come help out when asked. And many of those people have for this recording including Elvin Bishop offering slide guitar, Ronnie James on bass and Kaz Kazanoff on sax. Schermer himself has a voice that can bring to mind the very best soul music of another time and fits in right in line with some of the best today like Jesse Dee, James Hunter, Curtis Salgado, Andy Poxon and Tad Robinson.

Mighty Mike Schermer has been working the blues scene for a long time, he had a popular song come out a few years back titled “Big Sister’s Radio.” With Be Somebody he is ready to take the spotlight on his own and very much deserved. Twelve self-penned originals and not a bad track to be found on this spectacular disc that I personally cannot get enough of. Count this one in my favorites for the year already.