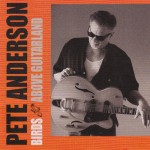 Pete Anderson is one of those guitarists with a tone that most players would die for. Never overstated playing, using just the right amount to address each song he presents. With a career deeply implanted with a twanging rock background, his music never really does stray too far away from his love for the blues. He has had his share of helping others, bringing artists like Lucinda Williams and Rosei Flores to the forefront and a long partnership performing with Dwight Yoakum, something that has crossed his work over several genres and all of them stunningly great.

Anderson has released a number of solo discs over the past decade, with his latest Birds Above Guitarland proving to be an impressive addition. It is filled with over-the-top guitar work, soulful vocals and songwriting that is simply brilliant. There is not a track on the album that you want to skip over on repeated listens, because they’re all just so damn good.

On “Outta The Fire” Anderson employs tasty horn backing and right out of the gate on this opening number you start to catch his clever lyrics, “I’d rather sweat with you, than be alone and cool.” “36 Hour Day” takes on how there just isn’t enough hours in one day to enjoy the company of his partner, “picking your peaches is a full time occupation . . . don’t care about sleep deprivation . . . I need a 36 hour day for me to love you.” Behind an accompanying piano on “Talkin’ My Baby Down,” a fast paced shuffle, he lets you know that he “don’t want nobody talkin’ my baby down, but if you do, make damn sure I’m not around.” And then on “Empty Everything” he relates his financial situation by stating “if nothing was gold, I’d be king.”

To me, some of the finest numbers on Birds Above Guitarland are when Anderson takes on a slow blues approach such as the hard biting guitar lines found on “For You,” the soulful “Talkin’ ‘Bout Lonely” or the horns capturing the mood of “I Got Mine.” But he can also come across sounding like a soundtrack for a film noir detective movie on the instrumental “Red Sunset Blues.” And he gets down-right swampy on the tune “Rock In My Shoe,” which he does two takes of. The first finds his guitar interlaced with harmonica and organ, while the second that closes the album features Bekka Bramlett on vocals that offers a different feel to the song, but both are still just as potent as the other.

Birds Above Guitarland is an album that should be looked into if toneful, exceptionally played guitar is your thing. And really, who doesn’t like that type of guitar? It defies genres that seem so much more than something you’d just call Americana or roots music. Let’s just say this falls into the cool guitar category. And Pete Anderson is the top cat in that musical mix.

It’s Crime-a-Billy Christmas Time Again With The Strange Tones! Dec. 14th The Story Of Piano Blues: From The Country To The City
Scroll to top