You are here: Home1 / CD Review2 / The Story Of Piano Blues: From The Country To The City 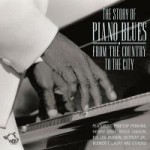 Oh, what I wouldn’t give to have the opportunity to go through the recorded archives of some of the record labels offering blues music. Take the German label Wolf Records for example. They consistently come up with releases of some very obscure or lost recordings of both well-known and overlooked musicians, including some never heard before tracks or out-of-print albums that deserve to be heard once again. They have covered artists like Magic Slim, John Primer, Detroit Junior and many others over the years and sometimes put out compilations that are flat out superb. Their latest release is one of those compilations, gathering ten blues pianists offering solo and groupings in both live and studio takes on a disc titled The Story Of Piano Blues: From The Country To The City.

Opening with one of the blues most beloved artists, Pinetop Perkins, the feel of these songs take you to the sporting houses to the levee and turpentine camps to the smoky clubs and juke joints. Though the tracks all have similar sounds, each of the artists included place their own personal embellishments on the how they approach the keys. Well know players like Perkins, Detroit Junior and Henry Gray are placed with those who should’ve gained more recognition such as James Crutchfield, Big Joe Duskin and Boogaloo Ames (best known as the mentor of Eden Brent).  Chicago and Memphis piano is both well represented, with the latter being showcased by Booker T. Laury and Mose Vinson, and we also receive glimpses of rural Louisiana and Mississippi and city players, too.

This is a collection that is filled with boogie and piano rolls that will make any fan of blues piano smile wider with each successive track. Sound quality is outstanding and the selections are both familiar and not so well recognized, but all are enjoyable and will have your fingers tapping along. This historical take on piano as front piece is an important acknowledgement of how the instrument played a vital role in the development of the genre. And as with any Wolf release, the liner notes are filled with detail about each of the artists. With well over an hour’s worth of music, this is a well done project that makes you wonder just how much more Wolf has sitting in their vaults. If they’re anything like The Story Of  Piano Blues, I am highly anticipating what will come next.