So Close To It
WindChill Records 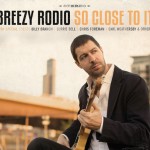 Fabrizio Rodio is another transplanted musician who’s found a home in an American blues mecca, and he certainly fits into the mix like he was born to it. Originally from Italy, “Breezy” Rodio has settled into Chicago with his extraordinary new release, So Close To It. Not only does he cover some of the greatest songs from the city’s masters, he also writes tunes that sound as if they’d been written by those famed musicians. This album is pure Chicago blues bliss — from start to finish. Breezy Rodio has it goin’ on!

It doesn’t hurt that Breezy has established himself well enough that many of the best players want to work with him. Special guests on the album include artists such as Billy Branch, Carl Weathersby, Lurrie Bell, Chris Foreman, and Joe Barr. Breezy also recorded with Chicago guitarist Linsey Alexander on both So Close To It and his first release from 2011 Playing The Game. Between these albums, Breezy also released a reggae album, showing that he can work his musical magic in other genres too.

Throughout the album, Breezy conveys his respect for those musicians who’ve influenced him, especially BB King, as Breezy covers three tracks best known for King’s versions, “When My Heart Beats Like A Hammer” (originally written by Sonny Boy Williamson), “Sneakin’ Around,” and “Please Accept My Love.” There are also two numbers associated with T-Bone Walker, “Too Lazy” and “Evil Hearted Woman,” one linked to Ray Charles, “Just About To Lose Your Clown,” and even an Elvis Presley tune, “One Broken Heart For Sale.”

His own originals are every bit as captivating as the covers. Stylistically, they jump all over, from the guitar bites of “Mary” or “I Win Some More,” to the ballad of “The Day I Met You,” to the slow blues on “How Much Can A Poor Man Take.” Rodio’s guitar is full of tone and right on the money.

In the long run, when everything has been said and done and the disc stops playing, So Close To It drips and oozes pure Chicago blues, and no matter how you shake it, Breezy Rodio has captured that city’s sound. Who said that you had to be American to capture that blues feeling?