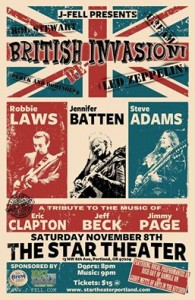 Everybody knows that blues rock world was put on its ear with the Invasion of British guitar greats that helped reintroduce American blues music to a wider audience. Three of the most renowned players were of course Eric Clapton, Jeff Beck and Jimmy Page. A trio of Portland’s best stringers have collaborated for a brilliant tribute show honoring these musicians for a concert they’ve named the British Re-Invasion. Cascade Blues Association Muddy Hall of Famer Robbie Laws will be taking on the music of Eric Clapton, Steve Adams known for his work with many nationally recognized progressive rock and new wave bands will handle the Jimmy Page selections, and former Michael Jackson guitarist will be displaying her skills with Jeff Beck’s music, an artist she performed with for three years. Backing the trio of guitar masters will be Federico Pol on bass, Merrill Hale on drums and Kevin Burkhart on keys. Joining the show will also be vocalists Rich Ray and Geoff Metts.

The British Re-Invasion will be held at The Star Theater, 13 NW 6th Ave., on Saturday, November 8th, starting at 9:00 pm. Tickets are $15.00 and can be purchased in advance at www.startheaterportland.com.

Josh Hoyer and The Shadowboxers Bringing Their Soulful Sounds To Portland- Nov....Tribute To Chuck Berry To Be Held At Duff’s Garage- Nov. 28th
Scroll to top