Come On Down
Cordova Bay Records 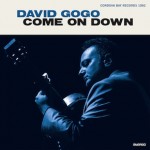 Canadian blues rocker David Gogo has released his thirteenth album with Come On Down, continuing on his path of creating exceptional music that features his sizzling guitar work and smooth soulful vocals. The new disc was inspired greatly by a pilgrimage that Gogo took to the Mississippi Delta where he soaked in the history of the blues as well as the landscape and its people. It is not all seen as positive revelations, but takes a realistic view on the worn down buildings, the poverty and otherwise not so glamorous, while still maintaining that the future can resolve these blights.

Come On Down is equally mixed with Gogo originals and some nice covers that offer a range of perhaps unexpected tracks such as The Atlanta Rhythm Section’s “So Into You” or Robert Palmer’s  “Looking For Clues.” He opens the disc with a perfectly executed take on The Faces’ “Bad ‘n’ Ruin,” setting the feel for what is to follow and a couple of Fleetwood Mac tracks close out the album, both delivering well with Christine McVie’s “Spare Me A Little Of Your Love” showcasing his soulful voice and harmonica ace Shawn Hall blowing vicious licks on “World Turning.”

Of his originals, the song “Kings” takes on chunky guitar pattern that sounds very Keith Richards like as he sings about making no apologies for what people expect of him, he is just going to keep on doing what feels best for himself. “Natchez Dog” takes on a traditional Delta mood with Gogo employing a steel-bodied guitar and accompanied by Hall once again on haunting harmonica and David Vest masterful piano tickling. “Blue Eyed Daisy” is rocker that presents burning guitar and twist of word lyrics as he describes this lady where you’ve got no chance of trying to control. She’s so fine she drives the old men crazy, puts the lightning in the sky, takes the smoke out of your stack, with movements that will hold you in a trance; this is one woman you’re surely never going to forget and the song hits hard and memorable.

David Gogo has won multitudes of Canadian blues awards throughout his career with his blend of blues and rock. His albums are consistently well produced with great sound and material. Come On Down falls right in line with that approach. Another winning disc from one of Canada’s best musicians.