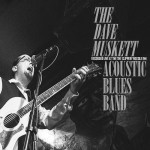 The Dave Muskett Acoustic Blues Band is based in Indianapolis, so it should be no surprise that it recorded it’s debut live album at that city’s renowned Slippery Noodle Inn. It is not the usual path for an acoustic artist who is best known as a solo performer to take on a band setting with his style of music, yet he does so here and it works to perfection. Strike down the thought you may perceive of a blues band, this is the bare minimum with stand-up bass, a small drum kit of snare and kick most often played using brushes, Dave’s finger-style guitar and dobro, and a harmonica. The group rolls through traditional sounding yet all original material, whether Piedmont or Delta inspired, along with a little ragtime and a touch of jazziness.

I met Dave Muskett during his appearances at the International Blues Challenge where he made it into the finals this past January. He’s one of those people that you like right from the get-go, friendly, and forth-coming, but when you hear him play that same quality of honesty and goodness shines through as well. This is music that makes you sit back and listen to closely with a smile on your face.

And as you listen to Recorded Live At The Slippery Noodle Inn you’re more than likely going to be smiling widely, too. Filled with memorable numbers that bring visions of exactly what is being sung clearly to mind. When Dave sings about the woman that draws his attention just by walking into the room you see and understand what he’s saying with “that kind of walk has a certain kind of talk to me.” And you know how happy he is with his partner when he explains that despite whatever she may put him through she can’t ever give him the blues. I love the ragtime feeling of “Ain’t My Good Girl Now,” the dobro work on “Rain Song” and “Sweet Mary Jane,” and the double-entendre silliness behind “Pet That Thing” with its audience sing-along and pretty much everything else on this disc. It’s a very enjoyable live performance with a band that works together with the kind of cohesiveness that usually the stuff of dreams. And I cannot get enough of it. I can already tell it’ll be one of my favorite discs for the year.