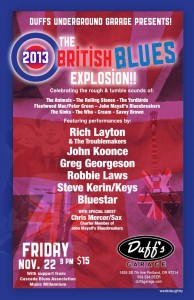 In the early 1960s, while the blues languished in obscurity here in the U.S., teenage guitarists all across England were wearing the grooves out of scratched 45s by Howlin’ Wolf, Muddy Waters, Jimmy Reed, Bo Diddley and dozens of American blues artists. The first wave of the British Invasion was led, not by The Beatles, but by working class bands that first put their own stamp on classic blues covers, and then tapped the blues idiom for a new generation of original rock ‘n roll.

The British Blues Explosion pays tribute to those English lads who kept the blues flame alive until we discovered it was right here all along.

The original Brithish Blues Explosion in 2012 was sold out before the show even started. To kick it up a notch in 2013, the night will feature British sax legend Chris Mercer,  a charter member of John Mayall & The Bluesbreakers.  Also on this special event will be Rich Layton & The Troublemakers, Jon Koonce, Greg Georgeson, Robbie Laws and Steve Kerin. Music by the likes of Eric Burdon & The Animals,  The Rolling Stones, The Yardbirds, Peter Green’s Fleetwood Mac, John Mayall’s Bluesbreakers, The Kinks, Savoy Brown, Cream, The Who and much much more is to be expected.