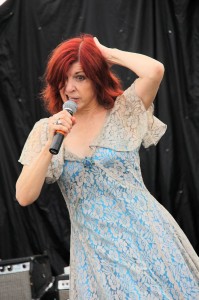 A message from guitarist Chris Carlson, “Yes, I’m goin’ down in Florida, where the sun shines damn near every day…Yeah, I’ll take my woman out on the beach fellas, and sit down on the sand and play.”

He may be quoting Muddy Waters, but Carlson grew up in Northern Florida and the time has come where he and his wife Duffy Bishop have decided to make the move down to the Southeastern corner of the country.

Now, now, do not get too overly upset just yet. The plan is that they will move down at the end of September and stay until April or May, then return to Portland for the summer. Now that’s not too bad is it? After all, we have had them gone for months at a time fairly regularly when they’ve left to perform the Teatro ZinZanni shows.

But before they do leave for their hiatus, Duffy and Chris will be holding a special Farewell Show at Duff’s Garage on Friday, August 22nd at 9:00 pm. Several guests will be on hand to help celebrate the night, including Jim Wallace, Kelly Dunn, Dave Kahl, Dave Fleschner, Brad Ulrich, Chris Mercer, Joe McCarthy and very special guest guitarist Henry Cooper.

Duff’s Garage is located at 2530 NE 82nd. This is a Cascade Blues Association co-sponsored event, so show your current membership card at the door for a $1.00 discount on admission. Let’s make the night a party to last until we see each other in the summertime and bid our best regards to Chris and Duffy while they’re away and being missed by us all.

Vaneese Thomas Ramblings On My Mind
Scroll to top