E.G. Kight, The Georgia Songbird, has returned from a scary life-threatening double illness of both meningitis and encephalitis that kept her from her work for many months. Going through such an ordeal gives time for many thoughts and Kight, inspired by this time to herself, has penned a collection of songs that she has released on a new recording titled appropriately enough, A New Day. Of the 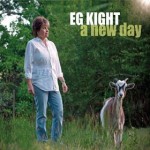 ten tracks presented on the disc, Kight was credited as the writer on each, with half co-written by Tom Horner, and assistance from her close friend Lisa Biales on one (“Graveyard Dead Blues”) and the late Ann Rabson of Saffire – The Uppity Blues Women fame on another (“Bad Times”).

A New Day falls in line with past Kight releases, meaning that it is highly exceptional material that focuses on her incredible vocals. The musicians behind her are all sensational, including such notable artists as guitarist Tommy Talton, drummer Bill Stewart and a trio of keyboardists laying down sharp licks, Paul Hornsby, Mike Harrell and Randall Bramblett. Michigan-based bluesman Greg Nagy joins Kight to blend his soulful voice with hers on “Bad Times.” Now that is a vocal pairing to be reckoned with, as each brings out the best in one another. Wow!

Kight reflects on her recent illness with the song “Holdin’ On.” “Now life is so much sweeter, I’m glad I’m here to tell you that, I’m a true believer, Where I have been I don’t want to go back.” Strong and emotional words and delivery. Pure E.G. Kight. And this album is filled with outstanding pieces, such as the gospel-inspired “Don’t Give Up” with hand claps and backing vocals that take us directly to church; the painful realization of watching your love walk away and knowing you “Can’t Catch The Wind”; on “Graveyard Dead Blues” she informs her partner that she can make a loving home, but do her wrong and she has “a stick broom in her kitchen and a big ol’ frying pan” and she’ll be ready to use them; and a new anthem for modern women, “Low Mileage Woman,” just slightly used, but you’ll love what you’ll be getting. There is also a couple terrific bluesy guitar pieces that are on completely different sides of the coin, with “Comin’ Down With The Blues” being a slow burning number and the closing “Time To Move On” taking on a more country blues approach.

Yes. E.G. Kight is definitely back. And A New Day places her right back where she belongs bringing us the blues as only she can. This is a terrific recording, ranking right along her best. I can hear her now, “Hey y’all, did ya miss me? Well wait’ll you get a load of what I have here.” And I’m telling you, this is something you need to hear. The Georgia Songbird flies again.