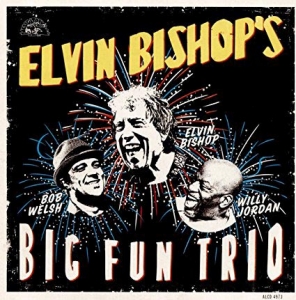 This is a bare bones recording with just Elvin strumming out his trademark superb guitar lines, Willy Jordan working his percussion on cajon, and Bob Welsh switching between guitar and piano. They present a great deal of sound between them and its traditional sounding blues through and through. Oh yeah, add into the mix on a triple of numbers harmonica work from good friends and masters Charlie Musselwhite, Kim Wilson, and Rick Estrin and you know you can’t go wrong.

Most of the tracks are original, but there are also five covers. Of those Willy Jordan shines brightly on the vocals for Sunnyland Slim’s “It’s You Baby,” Bobby Womack’s much-recorded “It’s All Over Now” and the Dave Bartholomew/Fats Domino classic “Let The Four Winds Blow” where he throws out a little scat alongside crisp slide work from Bishop. The other two covers are Ted Taylor’s “Can’t Take No More” and a return to Lightnin’ Hopkins’ “Honey Babe” that Bishop first recorded back in 1975 on the Let It Flow album.

Charlie Musselwhite and Bishop team up for their co-penned “100 Years Of Blues.” They talk about the legends that they have been around and paying their dues throughout the years that total between the two of them to more than 100. They jokingly state that they’ve been around so long that when they started the Dead Sea was just sick.

If you’re hungry you might just get a little more so listening to “That’s What I’m Talkin’ About” as Bishop asks the guys where they should eat. In some fast food joint or depending on where they’re at, he names off some favorite establishments around the country and what they have to offer. When suggested that he play a solo during the song, he says to let him take some of the grease off of his fingers first. But it just may be that grease bringing such a soulful sound in the first place.

Those are but two examples of Bishop’s penchant for slyly worded lyrics, whether they be social commentaries or just plain let’s have some good time fun. There’s definitely more of the latter presented with this group. It’s hard not to smile when listening to the words and the music is just icing on the cake.

This is down-home as you can get. Raw and authentic. Just three guys having a good time messing around and you’re invited to the party. Check your attitudes at the door because this one has the dial set to happy.