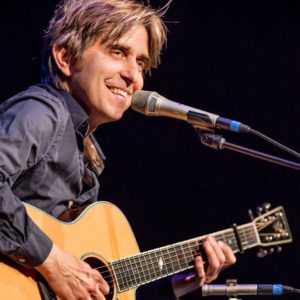 Eric Johnson, long hailed as one of the world’s preeminent electric guitarists, celebrates his acoustic side with his new release EJ. While this album emphasizes Johnson’s formidable skills as a singer-songwriter, his first completely unplugged album is also his most immediate and intimate. For Johnson, the creation of sublime music has always been about the journey inward, an approach shared by John Coltrane, Miles Davis, Wes Montgomery, Jimi Hendrix, and other visionaries.

Over the years, his unwavering devotion to perfecting his art has become as legendary as his attention to the instruments he plays. This is evident in his songs, interviews and the way he plays guitar and piano. As Stevie Ray Vaughan put it, “The guy has done more trying to be the best that he can be than anybody I’ve ever seen. He plays all the time, and tries to get his instrument in perfect shape all the time. He works hard on his tone, sound, techniques. He does incredible things with all kinds of guitars – electric, lap steel, acoustic, everything. Few people understand that when the guy was fifteen, he was playing Kenny Burrell and Wes Montgomery stuff, and he was doing it right – that’s pretty cool. Eric is a wonderful cat. He’s always been one of my favorite people in the world, as well as one of my favorite guitar players.”

Eric Johnson will be appearing at the Aladdin theater, 3017 SE Milwaukie Avenue, on Tuesday, January 31. This is an all ages show starting at 8:00 pm. Tickets are $25.00 with advance sales available at Ticketfly.com.