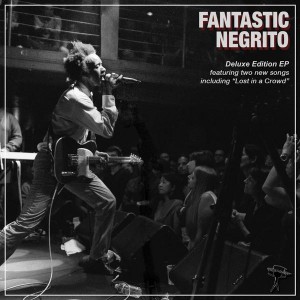 When I first began listening to Fantastic Negrito disc, I felt that I was hearing the sounds of a performer from Mali or one of the other musically rich regions of Western Africa. It had that raw feel to it that helped spawn the music that would come to America and give birth to the blues — very intense. Kind of the same feeling I had when I first started to hear the music of the hill country of Northern Mississippi. It is music that is filled with passion and perhaps a dark pain that can only be reflected through song. The more that I listened to it the more hypnotized I became and had to dig deeper into the person behind it as there was no liner notes to give me details about just who this Fantastic Negrito really was.

What I found surprised me. Fantastic Negrito is the moniker taken by Xavier Dphrepaulezz, who grew up in Massachusetts and had moved to Oakland in 1979. Fascinated by the music of Prince, he took up playing piano and caught the ears of a major label who in turn signed him to a million dollar contract, releasing a studio album titled X Factor. The music was derived from what he had heard through Prince mixed with soul and hip hop. He was sitting on top of the world, and then it all caved in around him as a car accident in 1999 placed him into a coma for three weeks and he awoke to mangled hands and arms and the deal with the label was gone. Worse yet, he did not know whether he would ever be able to create music again.

But the drive to succeed never left him and he discovered something in the sounds of the Delta blues that touched him. Combining his soulful background, he developed his own musical style that spoke to him as the continuation of black musical culture in America. Something that he often refers to as “blues with a punk attitude.” He literally took those sounds to the streets of Oakland, busking and playing wherever possible. He caught the attention of NPR through their Tiny Desktop Concert contest amongst around 7000 entries and has been on an upward surge since, even performing at SXSW and gaining rave responses.

The self-titled seven-song EP Fantastic Negrito is filled with personal expressions. Percussive hand clapping make the flow of the disc feel authentic to the music of the past, as does the often mournful moans. But it digs between the intensity of the themes behind the lyrics and comes out from the start like field hollers that by the end of the disc becomes very soulful and even funky. This is modern blues with a direct link to the roots, though it may be sitting more on the modern edge of today’s music. It’s definitely interesting and inspiring.